Chetan Sakariya after reaching his home at Vartej in Bhavnagar district, Gujarat, following the postponement of IPL 2021, immediately rushed to a nearby hospital where his father Kanjibhai has been admitted after testing positive for Covid-19. 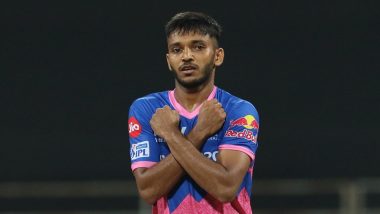 The Indian Premier League 2021 was suspended indefinitely on Tuesday after a number of players and staff members from several franchises tested positive for COVID-19 in a span of few days. Several domestic stars participating in the tournament traveled back to their homes after the postponement and after reaching RR starlet Chetan Sakariya, immediately went to a hospital to be with his COVID-stricken father. Chetan Sakariya Quick Facts: Meet the Saurashtra Pacer.

Chetan Sakariya after reaching his home at Vartej in Bhavnagar district, Gujarat, following the postponement of IPL 2021, immediately rushed to a nearby hospital where his father Kanjibhai has been admitted after testing positive for Covid-19. The Rajasthan Riyals pacer received the news last week about his father being admitted after a positive coronavirus diagnosis.

‘I was lucky because I had received my part payment from Rajasthan Royals a few days ago. I straight away transferred money back home, and that is helping my family the most in my toughest time,’ Rajasthan Royals pacer Chetan Sakariya said in an interview with Indian Express.

Chetan Sakariya has been a rising star in IPL 2021 and has been getting a lot of attention for his performances. It is understood that the medium pacer’s routine following the IPL 2021 postponement has revolved around hospital visits. From 9 am to 2 pm, he sits on a bench at the hospital and is especially worried as his father is a diabetic patient.

The medium-pacer has taken seven wickets so far in the competition and is batting for the competition to restart quickly. ‘People are saying stop IPL. I want to tell them something, I am the only bread earner in my family. Cricket is the only source of my earnings. I can give better treatment to my father because of the money I earned from IPL. Had this tournament not happened for a month, it would have been tougher for me,’ he said.

Chetan Sakaria was picked for Rs 1.20 crores during the auction, Being an uncapped player the pacer wouldn’t have had many expectations from his debut IPL season but the bowlers has impressed many with his skills and composure, becoming an integral part of the Rajasthan set-up.

(The above story first appeared on LatestLY on May 07, 2021 01:23 PM IST. For more news and updates on politics, world, sports, entertainment and lifestyle, log on to our website latestly.com).