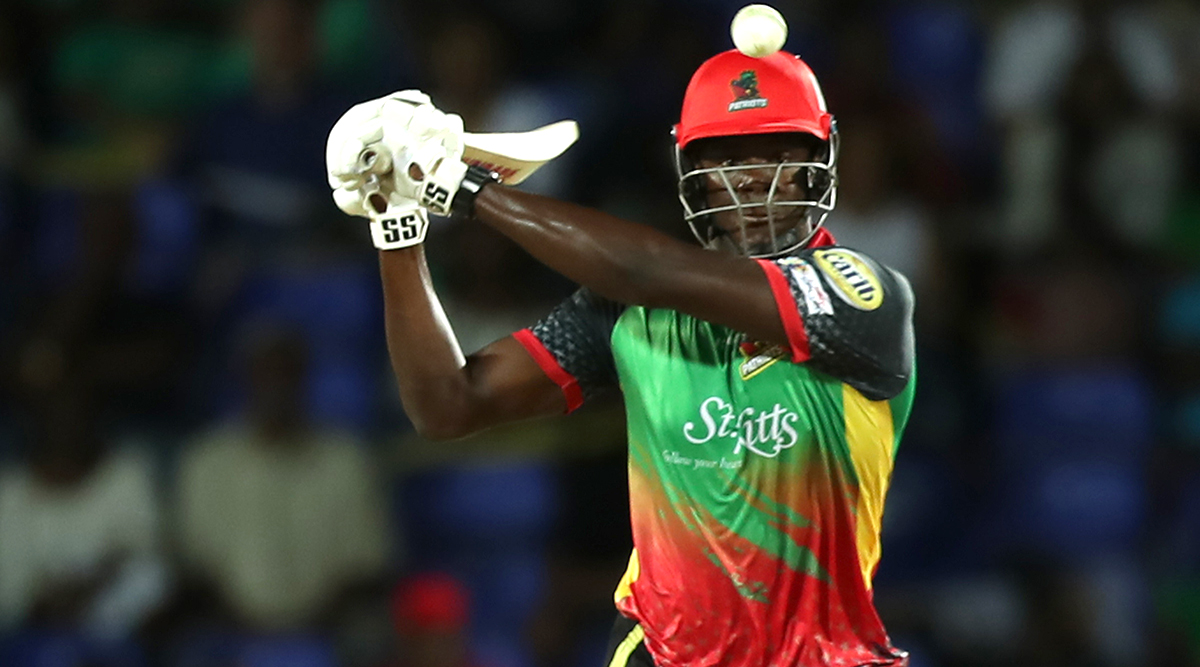 Caribbean Premier League 2019 again saw a nail-biting clash after St Kitts and Nevis Patriots defeated Trinbago Knight Riders in the super over. The high scoring match witnessed both the CPL 2019 teams scoring 200 plus runs while batting. Patriots’ skipper Carlos Brathwaite was awarded player of the match for his astonishing 64-run knock and brilliant bowling. He also delivered the super over giving only 5 runs. Warner Park at Basseterre in St Kitts was the venue of Patriots vs Riders game. St Kitts and Nevis Patriots vs Trinbago Knight Riders, CPL 2019 Match LIVE Cricket Streaming on Star Sports and Hotstar: Live Score, Watch Free Telecast on TV & Online.

Twitter was flooded with reactions over the game, who called it another stunning match in CPL 2019 T20 league. #CPL2019 #SKPvTKR were some trending searches on Twitter. Cricket fans also hailed Patriots' skipper Brathwaite for his stunning batting and bowling show in the match. Have a look at some of the tweets below. CPL 2019 Schedule in IST, Free PDF Download: Full Cricket Timetable of Caribbean Premier League 2019 With Match Timings, Teams and Venue Details.

The last home match is always the best. What a win! We take things to another level! 🇰🇳🇰🇳🇰🇳 @sknpatriots #CPL2019 #SKPvTKR

Was cheering him on to hit the 666, I said to hubby come on Carlos tonight is your night to shine like couple years back or last year in the #CPLT20 who remember it, so I said used @henrygayle and @Russell12A power shine tonight 😏 it works #CPL2019 #cpl https://t.co/ZAeks4Q0s6

Batting first, Trinbago Knight Riders hit 216/4 in 20 overs. Opener Lendl Simmons played a 90-run knock. Carlos Brathwaite was the leading wicket-taker with 2 wickets. Patriots followed their target well with helpful knocks by Evin Lewis (45) and Carlos Brathwaite (64). Rayad Emrit (21) and Alzarri Joseph (7) did great work in the end to level the scores. During the super over, Patriots totally outclassed Riders with Brathwaite taking his team to 18 runs. While bowling, he restricted Riders to just 5 runs to win the match.

St Kitts and Nevis Patriots still hold the third position in CPL 2019 points table. Patriots have won 3 matches and lost 4 in their CPL 2019 journey so far. Trinbago Knight Riders follow Guyana Amazon Warriors on the 2nd spot. Riders are the defending champions of Caribbean Premier League 2019. They won back to back titles in 2018 and 2017. On Wednesday, September 18, Jamaica Tallawahs vs Guyana Amazon Warriors match will be played at Sabina Park, Jamaica.