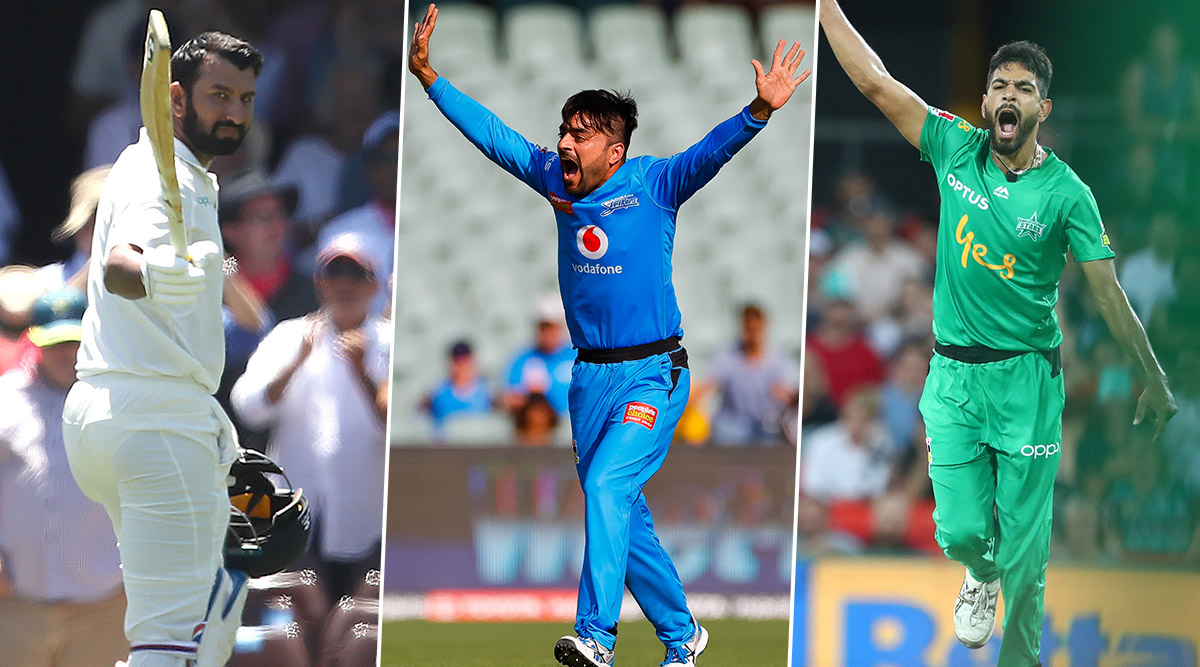 Action in cricket was red hot in the week gone by as the fans witnessed some magnificent matches along with several jaw-dropping individual performances. Be it red-ball cricket, ODIs or T20s, a variety of cricket matches were played in the past seven days by which proved to be an absolute feast for the fans. The thrill of these encounters was enhanced by some astounding knocks and jaw-dropping spells ball too. From Cheteshwar Pujara's brilliant double ton to Haris Rauf's and Rashid Khan's hat-trick, the gentlemen's game saw some prolific performances and below we'll look at some of those. IND vs SL 3rd Test 2020 Stat Highlights: Virat Kohli, Jasprit Bumrah Script Records as India Beat Sri Lanka by 78 Runs to Seal Series 2-0.

Speaking of International cricket, India dominated Sri Lanka in the three-match T20I series and clinched the affair 2-0. West Indies also looked at their prime against Ireland and won all the three ODI matches. In the longest format, England defeated South Africa in the nail-biting second Test by 189 runs. Other than these matches, some great quality of cricket was also played in Bangladesh Premier League (BPL) and Big Bash League (BBL) which certainly enthralled the fans. Meanwhile, let's have a look at five of the best performances on the cricket field which were witnessed in the last week.

Cheteshwar Pujara- 248 Against Karnataka in Rajkot

India's modern-day wall, Cheteshwar Pujara showcased his class during Saurashtra's Ranji Trophy clash against Karnataka. Coming to bat at three, the right-handed batsman looked at his prime and went on to play a marathon knock. With the help of his rock-solid defence, Pujara tormented the opposition bowlers and scored his 13th double century in First-Class Cricket. He scored 248 runs off 390 deliveries and guided Saurashtra to a mammoth score of 581 runs in the first innings. Well, India's forthcoming tour of New Zealand in around the corner as his good form is certainly a great boost up for the visitors.

Gone are those days when breaching the 140 kmph mark was a tough job for Indian pacers. In the current lot, the nation has many bowlers who can set the speed gun on fire and Navdeep Saini is certainly one of them. In the third T20I against Sri Lanka, the speedster wreaked havoc with his pace and bounce and took three wickets. On a pitch where Indian batsmen scored 201 in the first innings, Sri Lanka even failed to bat 20 overs and were packed for 123 runs.

Pakistan has been a factory of producing brilliant fast bowlers and their prodigy is Haris Rauf who is bowling one jaw-dropping spell after another in ongoing BBL. Playing for Melbourne Stars, the right-arm pacer delivered a sensational spell against Sydney Sixers and claimed a hat-trick. He dismissed skipper Callum Ferguson, Matthew Gilkes and Daniel Sams in consecutive deliveries to dent the opposition's top order. Courtesy Rauf's effort, Sixers were restricted for 145/5 in the first innings and later lost the match by six wickets.

Well, Rauf wasn't the only hat-trick hero from the week gone by as Rashid Khan also achieved the same feat. Batting first, Adelaide Strikers were bowled out for 135 runs and their loss looked a mere formality. However, the Afghan leg-spinner had different ideas and he bowled an inspired spell. Khan dismissed James Vince and Jack Edwards in the last two balls of 11th over before coming back to rattle Jordan Silk's stumps in the first ball of 13th overs. Unfortunately, his effort went in vain as the Sixers managed to cross the line with two wickets in hand.

Another Melbourne Stars' player who put up a colossal performance last week was Marcus Stoinis. Opening the innings, the right-handed batsman attacked the bowlers from the outset and crashed a plethora of records. Stoinis made an absolute mockery of the opposition bowlers and scored 147 runs off just 79 balls. It was also the highest individual score in BBL history which helped the Melbourne side to post 219 runs in the first innings. Sixers tried to make a comeback with the bat. However, the required target proved to be too much for them as they lost the match by 44 runs.

Cricket atmosphere will certainly not calm down as many exciting matches are lined up for the next week too. India and Australia will be seen locking horns in the three-match ODI series while Ireland's Tour of West Indies will go to the T20I leg. Also, BPL 2019-20 has moved to its knock out stage and the finals will be played in the forthcoming week too.