We witnessed some of the finest cricketing action this past week from the world of cricket. Sadly for Indian fans, India lost to New Zealand in the two matches Test Series by 2-0. This was India's first whitewash in six years. Apart from that, we saw South Africa losing to Australia at home in three matches T20I series by 2-1. 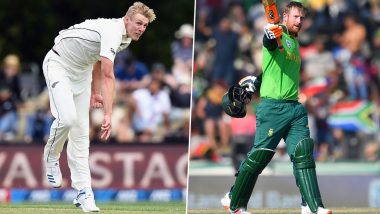 We witnessed some of the finest cricketing action this past week from the world of cricket. Sadly for Indian fans, India lost to New Zealand in the two matches Test Series by 2-0. This was India's first whitewash in six years. Apart from that, we saw South Africa losing to Australia at home in three matches T20I series by 2-1. There were many individual outstanding performances which include New Zealand's bowler Kyle Jamieson five-wicket haul and Proteas batsman Heinrich Klaasen maiden ODI ton. We will also have a look at some of the more amazing action by different cricketers in this week cricket week recap. IND vs NZ 2nd Test Match 2020 Result: Virat Kohli-Led India Suffer First Test Whitewash in 6 Years, New Zealand Seal Series 2–0 With Seven-Wicket Win.

The on-going Pakistan Super League 2020 is also offering fans with good entertainment as many talented International players have participated in the mega tournament. Bangladesh is also on Zimbabwe's tour, after defeating the home team in Test, the Bangla tigers have now started the ODI series with 1-0 win. South Africa also had a good start to their three matches ODI series as they defeated Australia in the 1st ODI.

New Zealand fast bowler Kyle Jamieson is indeed on a roll, after picking up Virat Kohli as his maiden wicket, he ended that match by a figure of 4/39. That was not all by Jamieson, he came up with a much more brilliant bowling performance in IND vs NZ 2nd Test match as he took his maiden five-wicket haul where he ended with figures of 5/45. Kyle Jamieson Scalps Maiden Five-Wicket Haul As India Bundle Out for 242 in First Innings of Second Test Against New Zealand.

Bangladesh cricket team batsman Liton Das played a blistering knock of 126 runs from 105 balls during BAN vs ZIM 1st ODI 2020. His inning indeed helped visitor posts a total of 321/6. Bangladesh won that match by 169 runs as they bowled out Zimbabwe at 152 runs. Liton Das could have added some more runs, however, he got cramp while batting and was forced to retire hurt after making 126 runs.

Ashton Agar is indeed very good form as he recently took a hat-trick against South Africa. The left-arm orthodox spinner continued displaying his good bowling form against South Africa in the T20I series as his figure of 3/16 in 4 overs in SA vs AUS 3rd T20I helped visitor seal the series by 2-1.

Moeen Ali who plays for Multan Sultans team in Pakistan Super League 2020 displayed a good class against Karachi Kings in PSL season 5 match no 10. The all-rounder made 65 runs from 42 balls which helped Sultans post a total of 186/6. Shan Masood led side defeated Kings by 52 runs in that game. Moeen Ali also took an important wicket of Sharjeel Khan in that game.

West Indies is also on the tour of Sri Lanka as they just got whitewashed in the three matches ODI series. Sri Lankan all-rounder Angelo Mathews had a figure of 4/59 in 10 overs in the third ODI which helped home team seal the series as West Indies managed to score 301/9 in 50 overs falling short of the target by six runs. We will have more interesting actions coming up from South Africa vs Australia ODI series, Sri Lanka vs West Indies T20I series and PSL 2020. Stay tuned with LatestLY for more news and updates from the world of cricket.

(The above story first appeared on LatestLY on Mar 02, 2020 09:23 AM IST. For more news and updates on politics, world, sports, entertainment and lifestyle, log on to our website latestly.com).