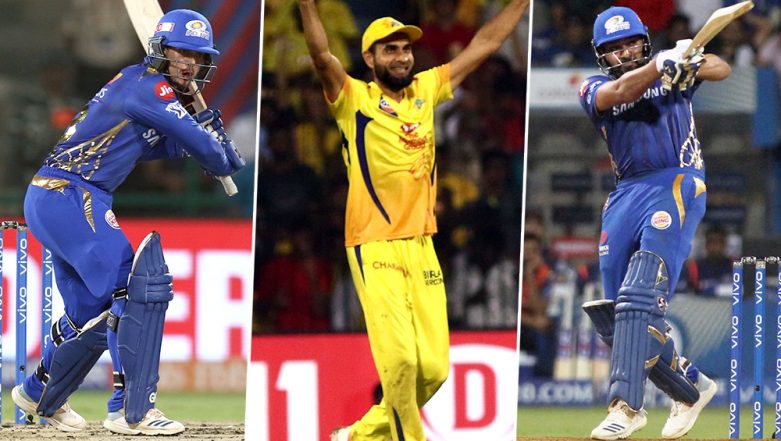 In the first match of Indian Premier League (IPL) 2019 Playoffs, i.e. Qualifier 1, it will be table-toppers Mumbai Indians (MI) taking on second-placed Chennai Super Kings (CSK) on May 7. The match will be played at MA Chidambaram Stadium at Chepauk in Chennai. The winner of IPL 12 Qualifier 1 match will qualify for the IPL Final; whereas the loser will play Qualifier 2, against the winner of Eliminator 1 (Confused? Check IPL Playoffs Schedule).

The two teams first played against each other this season was on April 3 at Wankhede Stadium, where Mumbai Indians won the match comfortably by 37 runs. The second time the teams clashed in IPL 12 was on April 26, where MI defeated CSK on their home turf, even more easily, i.e. by 46 runs. CSK vs MI, IPL 2019 Qualifier 1 Match Preview: Chennai Super Kings, Mumbai Indians to Lock Horns at MA Chidambaram Stadium For Spot In Final.

Both Mumbai Indians and Chennai Super Kings have developed an intense rivalry over the years. As the clock is ticking away for the crucial IPL game tonight, we bring you a list of players to watch out for in MI vs CSK, IPL 2019 Qualifier 1 match.

Quinton de Kock emerged as the highest run-scorer for Mumbai Indians this season. In 14 matches he played this year, the wicketkeeper-batsman scored 492 runs, which includes five half-centuries. QD Kock has had a decent run this IPL and would want to carry his form into an all-important game when they clash against CSK on Tuesday. How he negates CSK’s bowling unit will determine MI’s chances of winning.

Imran Tahir has had a stupendous season so far. In 14 matches he has played, Tahir has picked a total of 21 wickets – the best by a spinner this year. The leg-spinner will be looking forward to continuing his impressive run this season, considering how the batting unit has failed collectively, and how he’ll have to shoulder more responsibility.

Rohit Sharma has performed well in patches this season. If the Mumbai Indians skipper is eyeing glory for a record 4th time, he’ll have to come out all guns blazing in this crucial Qualifier 1 match. With top-order failing to deliver consistently this year, Rohit needs to pull up his socks and lead his side from the front, especially with IPL trophy only a couple of steps away.

Deepak Chahar hasn’t let CSK miss the services of a top quality Indian bowler in the side this season with his consistent performances. In 14 matches so far, Chahar has picked up 16 wickets at an impressive average of 24.87. He has been Dhoni’s go-to bowler and has managed to stem the flow of runs in the Powerplays, and also picking up wickets at the same time.

Hardik Pandya has enhanced his aggressive strokeplay comprehensively this IPL. Pandya has hit 28 sixes this season – the third most by any player this year. For MI to seal their IPL 12 Final berth, Pandya will have to bring his A-plus game in the contest against CSK. It will be interesting to see how he negates the threat of the bowling duo of Harbhajan Singh and Imran Tahir.

Mumbai Indians surprised many when they ended their league stage on the top spot of IPL 12 Points Table. In 14 matches, MI won 9 and lost 5, for which they won 18 points. As for CSK, the team has won and lost the same number of matches this season. However, a higher Net Run Rate (NRR) put MI ahead of CSK.

Will it be Mumbai, or Chennai? Stay tuned to LatestLY for all the latest updates about Indian Premier League (IPL) 2019.