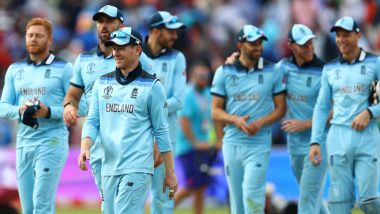 Although facing fears of losing semi-final spot at one stage, England proved their potential by bagging a spot in final ICC Cricket World Cup 2019. The Eoin Morgan-led side defeated Australia by 8 wickets in the semi-final and are set to face New Zealand in the final battle of CWC 2019 on July 14. The journey of hosts England in the tournament has been a thrilling one, with Englishmen clinching victories in must-win matches of the tournament. England’s Journey in CWC 2019 – A Deja Vu of India’s Triumph in 2011 World Cup?

England started their World Cup 2019 journey with a well-deserved victory over South Africa. However, their dominance faded after they lost against Pakistan and Sri Lanka. At one stage in the group stage, England were on the verge of going out of the tournament. But they successfully bounced back with victories against India and New Zealand. As England aim to bag their first-ever World Cup trophy, we take a glance on their astonishing journey in World Cup 2019 tournament. England vs New Zealand, ICC CWC 2019 Final: Eoin Morgan Says 'Sunday Is a Day to Look Forward to and Enjoy'.

In spite a great effort to chase 349-run target set by Pakistan, England batsmen remained short of 14 runs in the end. Pakistan won the match with great bowling during the end and England could not emerge winner in spite of two centuries by Joe Root (103) and Jos Buttler (107).

Against Bangladesh, England accounted for a one-sided victory after posting massive 386 on scoreboard batting first. Jason Roy hit 153 while Jos Buttler smashed 64 off 44. Shakib Al Hasan (121) batted well but Bangladesh were bowled out for 280 in the end, losing the match by 106 runs.

England vs West Indies at The Rose Bowl, Southampton

This was another one-sided game for the Englishmen as they bowled out West Indies for 212 with three wickets each by Mark Wood and Jofra Archer. While chasing, Joe Root (100) smashed an unbeaten century to bag victory for England by 8 wickets.

Scoring a huge total of 397-6 with Eoin Morgan's (148) century, England sent the win far out of Afghanistan's reach. Hashmatullah Shahidi (76) played a great knock but the Asian team could only reach 247-8 in 50 overs, losing the match by 150 runs.

The match against England came as a big shock to England, as they were outclassed while just chasing a 233-run target. Ben Stokes (82) and Joe Root (57) hit centuries but still England remained short of 20 runs in the end. Lasith Malinga took 4 wickets to bag victory for Sri Lanka.

England vs Australia at Lord's, London

The match against Australia came as a big setback for England who failed while chasing a 286-run target. Aaron Finch (100) smashed a century while David Warner (53) hit a half-century in the match. During England's batting, Jason Behrendorff and Mitchell Starc took 5 and 4 wickets respectively to bowl out England at 221/10.

England vs India at Edgbaston, Birmingham

In a must-win game to book their Semi-final spot, England defeat New Zealand by 119 runs after scoring 305/8 while batting first. Openers Jonny Bairstow (106) and Jason Roy (60) played fine knocks. While bowling, Kiwis could only reach 186-10 in 45 overs.

Australia vs England at Edgbaston, Birmingham

In what was expected as a nail-biting clash at semi-finals of World Cup 2019, ended with a one-sided victory for the hosts England who outclassed Australia by 8 wickets in the semi-finals. Australia could only score 223/10 batting first, and England easily chased the target with Jason Roy's 85-run knock.

England suffered massive blow in the tournament with some unexpected defeats, however, they bounced back to show everyone that they are red-hot favourites to clinch the World Cup title. England is just one step away to win the CWC 2019 as they face New Zealand in final. The match might be tough for both the sides, as New Zealand are also eyeing their first World Cup title like that of England. With the same thirst for winning World Cup final for the first time, the match will an enthralling encounter to watch out for.

(The above story first appeared on LatestLY on Jul 12, 2019 02:31 PM IST. For more news and updates on politics, world, sports, entertainment and lifestyle, log on to our website latestly.com).