The England team is replicating is none other than the Indian Cricket Team. The ‘men in blue’ also had a similar journey to their triumph in the ICC Cricket World Cup 2011. Prior to that edition, In 2007, India also got knocked out in the group stage and Bangladesh only played a crucial role in their exit. 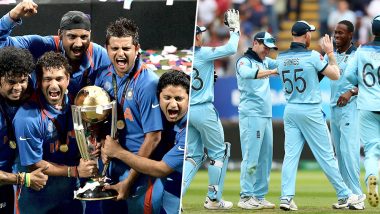 A wounded lion is more dangerous than the hungry one, and the three lions of England proved it by advancing to the finals of ICC Cricket World Cup 2019 after having a disastrous campaign in the 2015 edition of the mega tournament. They slew Australia before the Ashes 2019 in the semi-final and are all set face New Zealand in the final clash. With this, the hosts also scripted a fairy-tale comeback in the showpiece event after getting knocked out by Bangladesh in the group stage of ICC Cricket World Cup 2015. England vs New Zealand, ICC CWC 2019 Final: Eoin Morgan Says 'Sunday Is a Day to Look Forward to and Enjoy'.

But, doesn't England's campaign give you Déjà vu? They have a lot in common with the Indian Cricket Team. The Men in Blue had a similar journey to their triumph in the ICC Cricket World Cup 2011. Prior to that edition, in 2007, India too were knocked out in the group stage and it was Bangladesh who had played a crucial role in it. Australia vs England ICC CWC 2019 Semi-Final Stat Highlights: For the First Time After 1992, ENG Qualify for Final of World Cup.

However, in 2011, India hosted the mega tournament and went on to win the title as well. The notable thing is India, just like England, defeated their arch-rival Pakistan in the semi-finals. If the insane similarities between India and England continue, fans can expect the latter lifting the World Cup trophy on July 14.

Post the 2015 World Cup debacle, England played an aggressive form of cricket and even started the tournament as title favourites but somehow lost the plot in the middle losing a handful of matches. However, they bounced back and proved their mettle by defeating teams like India and New Zealand in must-win encounters and qualified for the semis.

After getting thrashed by Australia in the league match, Eoin Morgan and Co. displayed a stellar show and made the semi-final a mere one-sided encounter. The last two world cups also went to the host nation. So, that fact also goes in the favour of England Cricket Team. The Englishmen have never won an ODI world cup so it’s a great opportunity for the Eoin Morgan-led side to bring the title to the ‘home of cricket’.

(The above story first appeared on LatestLY on Jul 12, 2019 01:16 PM IST. For more news and updates on politics, world, sports, entertainment and lifestyle, log on to our website latestly.com).