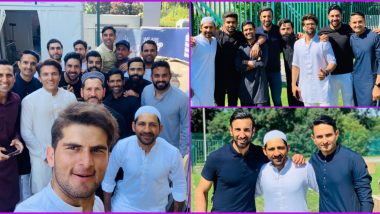 Pakistan cricket team is in England for their bilateral series with the home side. The visiting team is in Derby and will move to Manchester before the first Test on August 05. Meanwhile, the Pakistan cricket team players celebrated Eid ul-Adha or Eid al-Adha in UK together and the photos were shared by the Pakistan Cricket Board (PCB) on its social media channels. Eid al-Adha is being observed today (July 31) in UK while in Pakistan the festival will be celebrated on August 01 (tomorrow).  Pakistan Likely Playing XI for First Test vs England: Check Out PAK's Predicted Team for Series Opener at Manchester.

The players were spotted wearing traditional Kurta-Shalwar on the occasion of Eid or Bakrid. “Smile, it is Eid time in Derby. #EidMubarak to the Pakistan squad,” PCB wrote on Facebook. On Twitter, the cricket board wrote, “Pakistan cricket team is celebrating #EidAlAdha today!” And shared some more pictures of the players hugging and taking a selfie together. Pakistan vs England Test Series 2020: We Need Tail to Bat Well for Winning Series, Says Batting Coach Younis Khan.

Smile, it is Eid time in Derby. #EidMubarak to the Pakistan squad 🌙

Pakistan arrived in the UK earlier this month and since then have been staying in a bio-secure environment. The visitors played few intrasquad warm-up matches as well. Following the Test series, the two teams will face-off in T20Is. While Azhar Ali will captain the team in Tests, Babar Azam will lead in T20Is.

(The above story first appeared on LatestLY on Jul 31, 2020 05:34 PM IST. For more news and updates on politics, world, sports, entertainment and lifestyle, log on to our website latestly.com).