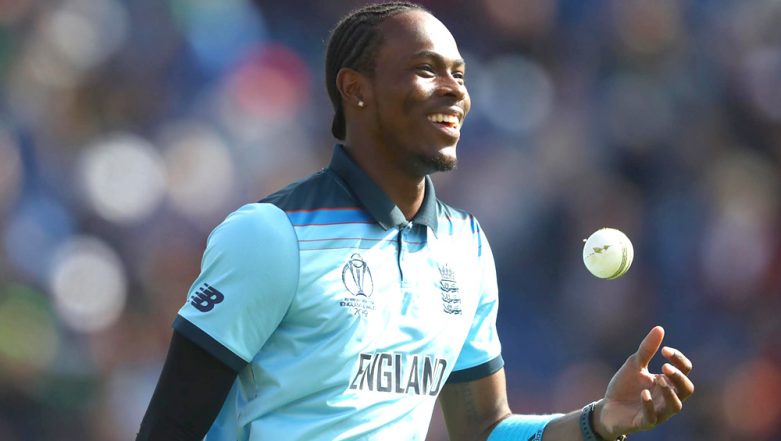 London, August 9: World Cup-winner Jofra Archer is in line to make his eagerly-awaited Test debut after being included in England's 12-man squad for next week's second Ashes Test against Australia at Lord's, while Moeen Ali was left out on Friday. Fast bowler Archer could replace James Anderson after England's all-time leading wicket-taker was ruled out with a calf injury that restricted him to sending down just four overs in a 251-run first-Test defeat by Ashes holders Australia at Edgbaston.

Archer missed that match because of a side problem but has since proved his fitness in a second-team fixture for county side Sussex against Gloucestershire, taking 6-27 and hitting a quick-fire century. England also have another seam-bowling option in Surrey left-armer Sam Curran. Fast bowler Olly Stone, who was in the squad for the first Test but did not play, has been ruled out with a back injury. Jofra Archer, England’s World Cup Hero, Bumps and Grinds On Mysterious Twerking Woman at Paint Festival in Barbados.

- Leach returns in place of Moeen -

Meanwhile, off-spinner Moeen has been dropped, with left-armer Jack Leach recalled into the squad ahead of Wednesday's start at Lord's. Moeen was omitted after a miserable match at Edgbaston. The 32-year-old all-rounder only managed returns of 1-42 and 2-130 with the ball, while scoring just four runs in the match -- including a first-innings duck.

His second-innings bowling display was particularly concerning, with Moeen offering neither control or persistent wicket-taking on a wearing pitch favouring spinners and even bowling a couple of head-high beamers. And both times he batted he was dismissed by Australia off-spinner Nathan Lyon, who has now claimed Moeen's wicket nine times in 11 innings.

Somerset's Leach played his last Test against Ireland at Lord's a fortnight ago when the nightwatchman made a career-best 92 -- an innings that helped set up an England victory and won him the man-of-the-match award.

England's middle-order trio of Joe Denly, Jos Buttler and Jonny Bairstow all had poor returns with the bat at Edgbaston, with wicketkeeper Bairstow also untidy behind the stumps.

But all three have retained their places in the squad, although Denly's position at number four had been called into question following scores of 18 and 11 in Birmingham. Australia are bidding to win their first away Ashes series in 18 years.

England have only twice come from 1-0 down to win an Ashes -- in 1981 when inspired by Ian Botham and in 2005, when they eventually won 2-1 in what is widely regarded as one of the most exciting series in Test history.