England vs Australia 1st ODI 2020: Steve Smith vs Adil Rashid and Other Exciting Mini Battles to Watch Out in Manchester

Both the teams are likely to field a similar XI in the ODI series as there aren’t many changes in either side. However, the return of Joe Root and Jos Buttler will certainly strengthen the England batting line-up. On the other hand, Marnus Labuschagne will provide stability to Australia’s vulnerable middle-order. 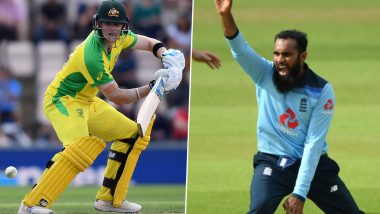 After some exciting contest in T20Is, England and Australia are set to lock horns in the three-match ODI series. The opening ODI is scheduled to take place at the Emirates Old Trafford in Manchester on September 11 (Thursday). Eoin Morgan and Co, who won the T20I series 2-1, must be high on confidence with their recent performances and would like to carry the momentum in the 50-over leg as well. On the other hand, Aaron Finch’s men should aim to rectify their mistakes to get a different result. Below, we’ll look at some mini-battles which one can witness in the opening clash. England vs Australia Series 2020 Schedule, Free PDF Download.

Both the teams are likely to field a similar XI in the ODI series as there aren’t many changes in either side. However, the return of Joe Root and Jos Buttler will certainly strengthen the England batting line-up. On the other hand, Marnus Labuschagne will provide stability to Australia’s vulnerable middle-order. Also, majority of the players in the Aussie team are familiar with English conditions which will definitely minimize the home advantage. As the opening ODI takes a countdown, let’s look at some individual battles which can enhance the thrill of the game. England vs Australia 3rd T20I 2020 Highlights: Mitchell Marsh Shines as Visitors Win by Five Wickets, Hosts Take Series 2–1.

The Aussie captain and opener got starts in all the three T20Is, but he failed to get on a big score. Nevertheless, he will get some more time to settle down in the ODIs, and he must aim to register a significant score. However, he will be challenged by Jofra Archer, who is in good rhythm lately. Also, the speedster dismissed Finch in the opening T20I and will not mind doing it again.

Smith didn’t make a great return to international cricket as he completely failed in the three T20Is and must be looking for redemption. However, tackling Adil Rashid’s spinning deliveries in the middle overs will take some beating from Smith. The veteran leg-spinner was absolutely phenomenal in the T20I series and will be raring to replicate his performance. Notably, he scalped Smith’s wicket twice in the T20Is.

The England Test captain might not have featured in the T20I series. However, he’ll be the mainstay of Three Lions’ batting line-up in the forthcoming matches. However, Mitchell Starc will have the onus to send Root back in the hut with his thunderbolts. Despite not picking too many wickets, the left-arm pacer bowled impressively and will be raring to change his side’s fortunes.

Unlike the whole season, rain didn’t play a part in the three-match T20I series, and the weather is expected to be cricket-friendly in the upcoming game too. Hence, fans must brace themselves to watch an exciting contest between two arch-rivals.

(The above story first appeared on LatestLY on Sep 10, 2020 10:00 AM IST. For more news and updates on politics, world, sports, entertainment and lifestyle, log on to our website latestly.com).