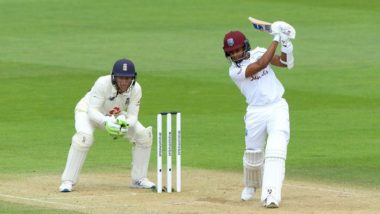 Since the start of the first test match, the Windies have been showing immense character on the field. After a stellar batting performance, on day 2 with the ball, the visitors did well with the willow. The two men who stood out for the team were Shane Dowrich and Kraigg Brathwaite. Both scored half-centuries and gave the visitors a much-needed respite. The team has 114 run lead on the board and we have England’s Rory Burns and Dominic Sibley batting on the score of 10 and 5 runs respectively. Currently, the scoreboard read 15/0 in 10 overs. Before getting into the stat highlights, let’s have a look at how the turned out for both sides.  England vs West Indies Live Score.

After Braithwaite got out, Shamarh Brooks and Roston Chase were the ones who supported the team well and stabilised the innings. However, Chase made way to the pavilion when he was three runs short of scoring his half-century.  Shane Dowrich, however, continued fighting with a half-century and surpassed his own best. For England, it was Ben Stokes who got four wickets in the match and also went past his 150 Test wickets. They bundled out WI on a total of 318 runs. Now, let's have a look at the stat highlights of the game below:

#This was Dowrich's first half-century in England.

#He also surpassed his previous best in England which was 24 runs.

# Brathwaite brought up his 18th half-century.

# This is the 165th Test match where the Windies have 100+ runs lead in the first innings.

From here on, England would want to score as many runs possible in the second innings and give a hefty total to the visitors.Stay with us for day 4 of the match tomorrow.

(The above story first appeared on LatestLY on Jul 10, 2020 11:44 PM IST. For more news and updates on politics, world, sports, entertainment and lifestyle, log on to our website latestly.com).