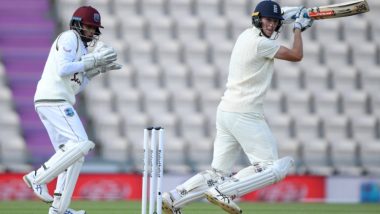 The day four of the first Test at Agnes Bowl stadium in Southampton witnessed a prolific performance from the batting team. In particular- the 22-year-old Zak Crawley who stood tall when England needed a prolific performance from the team, especially after the dismissal of Dominic Sibley. The man of the moment was Zak Crawley who registered his career-best knock with 76 runs. As of now, the scoreboard reads 284/8  and the hosts have a lead of 170 runs. In this article, we shall bring to you the stat highlights of day 4, but before that let’s have a look at how the match panned out for both sides. England vs West Indies Live Score.

So England had not lost any wickets in until stumps day three. Even on day 4, the two openers looked extremely comfortable. Dominic Sibley scored 50 and made way to the pavilion. After the fall of Joe Denly, Zak Crawley was the one who stood tall and gained praises as he scored 76 runs from 127 balls. Ben Stokes also stabilised the innings but he missed out on his half-century by four runs. Currently, we have Dominic Bess and Ollie Pope batting for the side. Now, let’s have a look at the stat highlights of the game.

# This is the 15th time Jason Holder dismissed a captain from the opposite team.

The hosts would want to put up 200 runs on the board for the hosts. Fortunately, the weather won't play a spoilsport and would allow us to enjoy the full game like today. Do tune for updates for day 5 tomorrow.

(The above story first appeared on LatestLY on Jul 11, 2020 11:42 PM IST. For more news and updates on politics, world, sports, entertainment and lifestyle, log on to our website latestly.com).