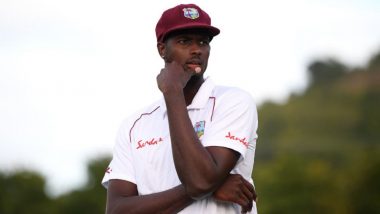 England is all set to play three-game Test series against West Indies. The matches will be conducted behind the closed doors. As per the press release by the England Cricket Board, Edgbaston selected as a contingency and training venue. Before we bring you the full schedule and venue of ENG vs WI, 2O20 lets have a look at the other details of the series. As per the statement issued by the England Cricket Board Team, West Indies will arrive in England on June 9, 2020, and will be travelling by Emirates Airlines. ‘We Stand Against Racism’: England Cricket Board Shares Beautiful Message About Unity in Diversity.

The team will be under a three-week quarantine and before they move out to the Ageas Bowl. The matches will be conducted behind closed doors. The first Test match will be starting from July 8, 2020, at the Ageas Bowl. The second game will be hosted at the Old Trafford on July 16, 2020. The same venue will be hosting the third and final game. Special emphasises have been laid on the norms of social distancing. Medical screening will also be made mandatory. Now, let’s have a look at the three-game schedule below:

The England Cricket Board has also thanked Team West Indies for their co-operation and making this tour a reality. The press release also stated that the fans who bought tickets for the games will also get their refund. From June 2, 2020, the process of ticket funding will begin on the counters.

(The above story first appeared on LatestLY on Jun 02, 2020 09:24 PM IST. For more news and updates on politics, world, sports, entertainment and lifestyle, log on to our website latestly.com).