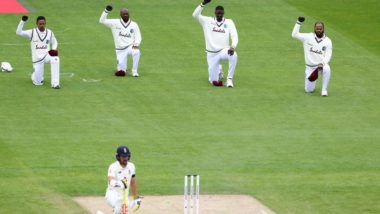 England and West Indies are currently battling it out at the Old Trafford Cricket Ground in Manchester. Now ahead of the game, the players from both teams took one knee as a mark to pay respects to Georg Floyd who was killed by the police in the USA. Ever since hashtag Black Lives Matter is gaining a lot of popularity. Many sporting personalities had taken to one knee ahead of their respective games and players like Roger Federer, Coco Gauff, Serena Williams, Marcus Rashford, the official account of Manchester United and many others supported #BlackLivesMatter.  England vs West Indies, Live Score Updates.

Now after the toss at the Old Trafford when the two teams stepped on to the pitch, they took one knee and once again paid homage to Geroge Floyd. In fact, even before the first Test match, even West Indies legend Michael Holding had spoken up about racism and said. "You have to first cleanse society of racism and only then will you have no problems in sport". Check it out below:

Talking about the series, Jason Holder's men are already leading the three-match Test series by 1-0. The second Test had a delayed start due to the weather playing spoilsport. West Indies won the toss and elected to bowl first. Jofra Archer has been left out of the squad as he breached the bio-secure protocols. At the time of going online, England was batting on nine runs for no loss.

(The above story first appeared on LatestLY on Jul 16, 2020 05:31 PM IST. For more news and updates on politics, world, sports, entertainment and lifestyle, log on to our website latestly.com).