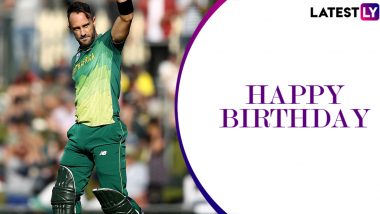 Former South Africa captain Faf du Plessis celebrates his 36th birthday on Monday (July 13, 2020). Hailing from Pretoria, the right-handed batsman has been a vital cog of Proteas batting line-up over the years. Du Plessis has been blessed with an impeccable technique through which he has toiled many prominent bowling line-ups. Be it surviving an entire day of a Test or playing a quick-fire in T20 match, the talismanic batsman rose to every challenge which came his way. Along with his batting prowess, Du Plessis has also done a commendable job as the skipper of the team. As the veteran cricketer turns a year older, let’s look at some of his lesser-known facts. Faf du Plessis Suggests Isolation for Players Before & After ICC Men's T20 World Cup 2020.

Making his international debut in 2011, Du Plessis didn’t take long in cementing his place in the side. He made a brilliant 60 on ODI debut against India and announced his arrival. A year later, Du Plessis was awarded his maiden Test cap and he scored a match-saving century. Speaking of his numbers, Du Plessis has scored 3901, 5507 and 1407 runs in 65 Tests, 143 ODIs and 47 T20Is. Meanwhile, as the talismanic cricketer turns a year older, let’s look at some of his lesser-known facts. Faf Du Plessis ‘Motivated and Keen’ to Play for South Africa in All Three Formats After Stepping Down As Captain.

With being 36, Du Plessis might be in the twilight of his career. However, a lot of fire is still left in him. As per the latest ODI batting rankings, the batsman is placed at the fifth position. Earlier this year, Du Plessis stepped down as the skipper of the national team but is still determined to contribute his side with the bat in hand.

(The above story first appeared on LatestLY on Jul 13, 2020 08:00 AM IST. For more news and updates on politics, world, sports, entertainment and lifestyle, log on to our website latestly.com).