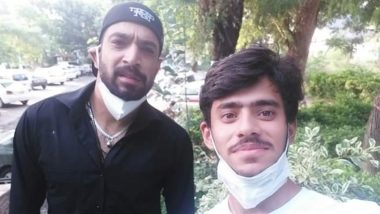 A fan was left shocked after he realized that he had interacted with Pakistan cricketer Haris Rauf, who has been tested positive for the novel coronavirus. The pacer did not travel to England with the squad for their three-match Test and T20I series after a sequence of positive test results for the virus and was advised to stay in quarantine by the cricket board. Pakistan vs England 2020: No 5-Star Accommodation for Visitors in Derby (View Photos).

A Pakistan cricket fan named, Muhammad Shahab Ghauri, revealed on his social media that he had taken a selfie with Haris Rauf but wondered on how he didn’t travel with the national team squad to England for their upcoming series. England vs Pakistan 2020: Visitors Play Indoor Games to Stay Active While in Quarantine.

Upon research, he found out later that the cricketer has been tested positive for the virus and as a result couldn’t travel with the team. The 26-year-old was then replaced by Mohammad Aamir in the squad, who left for England last week after clearing two successive COVID-19 tests.

If you happen to meet Haris Rauf on the streets of Pakistan, refrain from clicking a selfie with him. #cricket #harisrauf #Pakistan pic.twitter.com/0waFrZkYrv

Haris Rauf was tested positive five out of six times but according to a recent report from ARY News, the pacer’s results for the yet another recently concluded test came out to be negative. However, the 26-year-old will undergo yet another test this week and will have to clear that as well in order to join the team in England.

According to the eligibility criteria, a player must test negative for two successive CCOVID-19 tests in order to join the squad amid the pandemic. Pakistan are scheduled to play three-match Test series against England which will be followed by a three-game T20I series.

This will be Pakistan's first international game since the coronavirus enforced suspension, however, England recently concluded a Test series against West Indies and are also scheduled to begin a three-game ODI series against Ireland from July 30, 2020.

(The above story first appeared on LatestLY on Jul 29, 2020 08:35 AM IST. For more news and updates on politics, world, sports, entertainment and lifestyle, log on to our website latestly.com).