Pakistan vs England 2020: No 5-Star Accommodation for Visitors in Derby (View Photos) 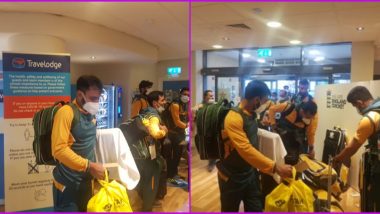 Pakistan cricket team is in England for their upcoming bilateral series against the home side, starting August 05 at Old Trafford in Manchester. Following the 14-day isolation period in Worcester, the visiting team has now moved to Derby. As per reports, the Pakistan team will stay in a three-star hotel (Travelodge) while in Derby. The Travelodge is next to Derbyshire County Cricket Club ground where Pakistan players will practice. England vs Pakistan 2020 Full Schedule Announced by ECB, Series to Start on August 5; Hosts to Take on Ireland in ODIs As Well.

Pakistan journalist Saj Sadiq took to Twitter and wrote, “who says cricketers live a life of luxury staying in 5-star hotels around the world. The Pakistan squad will be staying in a Travelodge in Derby for the next couple of weeks,” as he shared photos of players arriving in Derby.

Check Out the Photos

Who says cricketers live a life of luxury staying in 5-star hotels around the world. The Pakistan squad will be staying in a Travelodge in Derby for the next couple of weeks #ENGvPAK #Cricket pic.twitter.com/4DPLaf7Sns

Reportedly, only Pakistan team is staying in the hotel. The visitors played an intra-squad two-day warm-up match at Worcester as well. And now are expected to begin their practice in Derby from Wednesday. Pakistan’s tour of England features three Tests and as many T20Is. Shahid Afridi Foundation Logo to Feature on Pakistan Cricket Team Kits During Upcoming England Tour.

As per the schedule, After the first Test on August 05, the second and third Tests will be played on August 13 and 21 respectively. The T20Is matches will be held on August 28, August 30 and September 01.

(The above story first appeared on LatestLY on Jul 14, 2020 07:17 PM IST. For more news and updates on politics, world, sports, entertainment and lifestyle, log on to our website latestly.com).