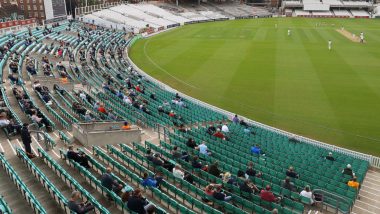 While England vs West Indies Test series is being held behind the closed doors, fans were allowed to watch a friendly cricket match between Surrey and Middlesex at The Oval in South London. This is the first time spectators were allowed into a stadium to watch a cricket match following the coronavirus lockdown. Around 1,000 fans were allowed to watch the match as the UK government is planning to open the stadiums for fans in October. England Announce 14-Man Squad for Ireland ODIs, Joe Denly and David Willey Included.

The fans, who attended the match, followed social distancing as alternate rows were used in two stands. Besides it, two-seat gaps per group was made mandatory as well.

"I think it's really important [for county cricket] because we haven't had crowds back in our grounds since September 2019 and perhaps this will be a pilot that will allow more supporters to return in the coming weeks," Surrey chief executive Richard Gould was quoted as saying by Sky Sports.

"Our season finishes in eight or nine weeks' time so it's a short season and it's important that we don't go a year-and-a-half without having supporters in the ground. England vs Ireland 2020 ODI Series Schedule in IST: Get Fixtures, Full Time-Table.

It's been a definite success. We'll measure it on a number of different levels, firstly was the demand for tickets. We went to our members last week and we got literally thousands of calls, people wanting to return for what is a friendly match, normally we'd have much smaller crowds than this so to get a thousand people desperate to come and more is definitely great news and so far the day's going well,” he added.

(The above story first appeared on LatestLY on Jul 27, 2020 05:55 PM IST. For more news and updates on politics, world, sports, entertainment and lifestyle, log on to our website latestly.com).