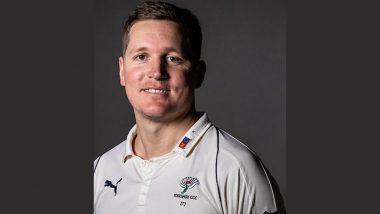 London, July 5: England batter Gary Ballance has returned to playing cricket for Yorkshire's Second XI for the first time since he acknowledged racially insulting his former county teammate Azeem Rafiq. The 32-year-old left-hand batter, who has played 23 Tests and 16 One-day Internationals, had admitted to calling Rafiq, a Pakistan-origin player, 'p***' and said he "deeply regrets some of the language I used in my younger years", reports mirror.co.uk. Rafiq had exposed the institutional racism in the club during his nearly decade-long stay at Yorkshire between 2008 and 2018. Birmingham Weather Forecast for July 5: India vs England 5th Test Day 5 at Edgbaston Faces Rain Threat?

The off-spinner, who moved from Pakistan to the UK in 2001 and played a total of 39 First-Class games taking 72 wickets, has said that England players Alex Hales and Ballance would refer to cricketer of colour as 'Kevin', adding that the former had also named his dog 'Kevin', as it was black. The cricketer, originally from Karachi in Pakistan, who began his cricketing career with England age-group sides including U-15, U-17 and U-19, alleged that Ballance had openly slammed teammates for speaking to him during a pre-season camp.

Yorkshire's interim managing director of cricket Darren Gough had confirmed earlier this year that Balance, who returned to playing for Yorkshire's Second XI after September last year, would stay at the club and be a part of "an inclusive and welcoming environment", according to Daily Mail. "It was a difficult situation with Gary," Gough had said. "He was disciplined by the club, he admitted the use of racist language and apologised for it. It's crucial all forms of discrimination are eradicated from our game and society and we talked to Gary about his actions and behaviour. He understands and he's educating himself. David Warner’s Wife, Candice, Fumes Over Life-Time Ban on Husband From Taking Up Leadership Role in Australia.

"He's going to be part now of an inclusive and welcoming environment that we're building at Yorkshire and that's obvious already in our recruitment on the coaching side," Yorkshire coach Ottis Gibson told Daily Mail. "Gary Ballance in any team in the County Championship makes that team better. We will support him as best as we can and hope that he gets through what he's going through and comes back as soon as he can. He is an asset," he added.

(The above story first appeared on LatestLY on Jul 05, 2022 03:22 PM IST. For more news and updates on politics, world, sports, entertainment and lifestyle, log on to our website latestly.com).