Speaking of his prolific career, Hales has scored 2419 runs in 69 ODIs and 1644 in 60 T20Is. Despite having such numbers, the right-handed batsman is not the part of England’s current set-up as he was tested positive in a dope test just before the 2019 World Cup which became a reason for his ouster. 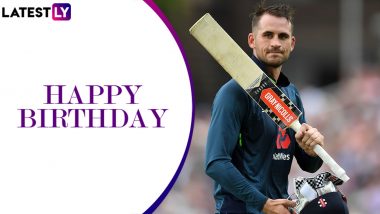 England’s swashbuckling opener Alex Hales celebrates his 31st birthday on Friday. Born on January 03, 2019, the right-handed batsman tends to attack the bowlers from the outset and has demolished many potent bowling line-ups in his career. Hales has represented England in all three formats of the game and has played an important role in the nation’s rise in white-ball cricket. Post England’ forgettable campaign in 2015 World Cup, Hales became the side’s prime opener in T20Is and ODIs and certainly rose through the expectations. He was also the first English batsman to score a century in T20Is and will be eyeing to put up a brilliant show in 2020 T20 World Cup. Alex Hales' Mimicry of Nandamuri Balakrishna's 'Don't Trouble the Trouble' Dialogue in this SRH Video will Impress Balayya Fans.

Speaking of his prolific career, Hales has scored 2419 runs in 69 ODIs and 1644 in 60 T20Is. Despite having such numbers, the right-handed batsman is not the part of England’s current set-up as he was tested positive in a dope test just before the 2019 World Cup which became a reason for his ouster from the tournament and since then, hasn’t played for the national side. However, the dasher is eyeing to make a comeback in the England team for the T20 World Cup in Australia. Meanwhile, lets’ look at some of the best knocks played by the batsman as he turns 31.

147 Against Australia in Nottingham

The third ODI of Australia’s 2018 Tour of England saw the highest ever team score in ODIs and Hales was the chief architect in guiding England to the feat. With Jason Roy and Jonny Bairstow being in good form, Hales has to come at three. However, the change in the batting position didn’t affect his intent as he thrashed the Aussie bowlers to all parts of the ground and scored a blistering century. His knock guided the hosts to 481/6 in first innings which prove to be too much for the Men in Yellow as they lost the match by 242 runs.

171 Against Pakistan in Nottingham

The Trent Bridge cricket ground witnessed the top two highest ODI scores and Alex Hales shined in both of them. Before 481/6 against Australia, the highest ODI team score was 444/3 which came in the third ODI of Pakistan’s 2016 Tour of England. Batting first, Hales wreaked havoc against the likes of Hasan Ali and Mohammad Amir and registered his highest ODI score. Riding on Hales’ brilliance, England posted 444/3 in the first innings and later won the match by 169 runs.

116* Against Sri Lanka in Chhattogram

England had a forgettable outing in the 2014 T20 World Cup as they lost three of their four league-stage matches and were knocked out of the tournament. However, their only victory came against Sri Lanka, who went to lift the title later. Chasing a target of 190 runs, Hales attacked the bowlers from the outset and made the clash a one-man show. The likes of Lasith Malinga and Ajantha Mendis looked ineffective against him as he went on to become England’s first centurion in T20Is and guided his side to a six-wicket triumph.

The right-handed batsman is currently participating in the Big Bash League 2019-20 in which he is representing Sydney Thunders. He has played some magnificent knocks in the tournament and will like to guide his side to the title. With the likes of Dawid Malan, Jason Roy and Jonny Bairstow being in top form, making a comeback will not be easy for Hales. However, the batsman is a veteran of two T20 World Cups and consistent performances might well earn him a berth in England’s squad.

(The above story first appeared on LatestLY on Jan 03, 2020 08:30 AM IST. For more news and updates on politics, world, sports, entertainment and lifestyle, log on to our website latestly.com).