Happy Birthday Kesrick Williams: A Look at Some Brilliant Spells by the Windies Pacer

Making his international debut in September 2016, Williams has been a regular part of the T20I side and his numbers are sensational too. In just 25 T20I matches, the bowler has scalped 41 wickets. In fact, the bowler recently grabbed the limelight for his on-field banter with Indian skipper Virat Kohli. 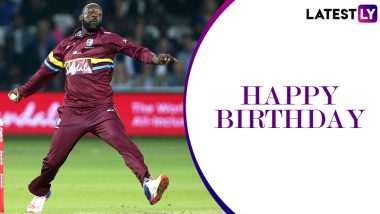 West Indies' pacer Kesrick Williams turns a year older on Friday. Born on January 17, 1990, the bowler celebrates his 30th birthday. Hailing from Grenadines, the right-arm pacer has all the attributes to thrive in T20 matches and the swag of his cheque book celebration is one of a kind. The tall and lanky pacer has a bucket of variations in his armoury which makes him a force to reckon with. Be it rattling the stumps with an impeccable yorker or foxing the batsman with a deceptive slower delivery, Williams has many ways to get the better of the batsmen and below, we'll look at some of his prolific spells. WI vs IRE 1st T20I 2020: Paul Stirling’s Heroics Help Ireland Beat West Indies in High-Scoring Thriller.

Making his international debut in September 2016, Williams has been a regular part of the T20I side and his numbers are sensational too. In just 25 T20I matches, the bowler has scalped 41 wickets. In fact, the bowler recently grabbed the limelight for his on-field banter with Indian skipper Virat Kohli. The tussle between the two was quite intensified in the three-match T20I series against where Williams got the better of the star batsman in the second game. Meanwhile, let's look at some brilliant performances by the Caribbean pacer.

4/28 Against Bangladesh in St. Kitts

Coming from a 0-3 defeat in the ODI series, a lot was on stakes in the first T20I of Bangladesh's 2018 Tour of West Indies and Williams rose to the occasion. Batting first, the Bangla Tigers were completely outplayed by the pacer's magnificent variations and lost wickets in a cluster. Veterans like Mushfiqur Rahim and Mahmudullah also fell prey to him as the visitors could score only 143 runs. While chasing, the Windies didnt break a sweat and won the rain-affected match by seven wickets (D/L Method).

3/26 Against Trinbago Knight Riders in Trinidad

Another Kesrick Williams special was witnessed in the Trinbago Knight Riders vs Jamaica Tallawahs clash in Caribbean Premier League (CPL) 2019. Playing for the Jamaica side, the paper showcased a brilliant performance and dented the opposition's batting line-up. He took the wickets of Brendon Mccullum and Sunil Narine upfront and restricted the scoring rate in the death overs. As a result, the Trinbago side could only manage 147 runs which the Jamaicans chased down with four wickets in hand.

3/30 Against Guyana Amazon Warriors in Guyana

Williams enjoyed a sensational run in CPL 2017 and bowled one magnificent spell after another. One of his remarkable performance in the tournament came against Guyana Amazon Warriors. Batting first, the Tallawahs could manage only 128 runs and their loss was on the cards. Williamson, however, had other ideas and he bowled a splendid spell. He never allowed the batsmen to dominate him and also took wickets at regular intervals. The pacer registered three scalps in total and guided his side to a two-wicket triumph.

4/43 Against Ireland in Harare

Known for his heroics in T20Is, Williams also has played a handful of ODIs and his best performance came against Ireland during the ICC Cricket World Cup qualifiers 2018. The Caribbean side could only muster 257 runs in the first innings and the onus of their victory was on the bowlers. Williams came to his side's rescue and bowled a fabulous spell. In the middle overs, the fast bowler bagged wickets in a cluster and the Irish batsmen fell like a pack of cards. As a result, Ireland were bundled out for 205 runs and lost the match by 52 runs.

Currently, the pacer in the three-match T20I series between West Indies and Ireland. He didn't enjoy the best of outings in the opening game and will eye to make a thumping comeback in the second T20I of the series on January 19. Also, the ICC T20 World Cup 2020 is less than a year away and the pacer will eye to showcase some colossal spells in the mega-tournament to help West Indies retain the title.

(The above story first appeared on LatestLY on Jan 17, 2020 08:30 AM IST. For more news and updates on politics, world, sports, entertainment and lifestyle, log on to our website latestly.com).