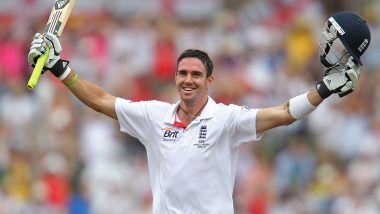 Arguably the best batsman to have ever donned the England jersey, Kevin Pietersen celebrates his 40th birthday on Saturday (June 27, 2020) and wishes are pouring in for him from all around the world. The former right-handed batsman proved his mettle in all forms of the game and guided his side to numerous victories. In fact, Pietersen is known as someone who has changed the perspective of the viewers about cricket as there weren’t many batsmen a decade ago who could counter the swinging red ball and also score quick runs in the end overs. Also, several bowlers still curse him for inventing the switch hit which has changed the dimension of the game. Kevin Pietersen Birthday Special: Top Test Performances By South Africa-Born English Batsman as He Turns 40!

Making his debut in November 2004, Pietersen didn’t take long in cementing his place in the national team. His ability to accumulate quick runs with minimal risk made him the cornerstone of England batting line-ups in all the formats. Speaking of his numbers, Pietersen aggregated 8181, 4440 and 1176 runs from 104 Tests, 136 ODIs and 37 T20Is respectively. Also, he was adjudged the Man of the Tournament during England’s triumph in 2010 T20 World Cup. Meanwhile, let’s look at how Twitterati wished him on his special day.

One of the finest to have played for England😎 #HappyBirthdayKP.@KP24 had a vision of his own & the shots he played were totally outrageous🤯

@KP24 Happy Birthday big man. England’s greatest ever batsman & a man so far ahead of his time it killed his career. Genuine legend. One day I’ll tell my kids about Kevin Pietersen 👏 🙇‍♂️

This was a very brave knock from Kevin Pietersen. The Ashes was on the line, England had to either win or draw the Test, and that's when KP opened his arms and went for the kill. To dominate those bowlers, you must be good, and he was way too good. https://t.co/B3fA0alWdv

Just look at the celebration and listen to the commentary :

YOU RUN OUT OF SUPERLATIVES WHEN YOU WATCH THIS GUY PLAY

And happy birthday to the great Kevin Pietersen, who on Test debut did this to Glenn McGrath:https://t.co/QTa244vCXu

🌟 Third-highest run-scorer for 🏴󠁧󠁢󠁥󠁮󠁧󠁿 across formats

💥 Master of the 'switch-hit'

Pietersen’s record in international cricket is sensational by any standards. However, his career was shortened owing to his fall-out with the England Cricket Board. Nevertheless, he continued to showcase his blitzes in various T20 leagues around the world like Big Bash League (BBL) and Indian Premier League (IPL). He finally announced his retirement in 2017 and since then, he has been an active commentator.

(The above story first appeared on LatestLY on Jun 27, 2020 04:48 PM IST. For more news and updates on politics, world, sports, entertainment and lifestyle, log on to our website latestly.com).