Born in 1988, the right-handed batsman is widely regarded as one of the greatest cricketers of all time, and his records are nothing short of jaw-dropping. "Throw me to the wolves, and I'll return leading the pack" – this saying is indeed apt to describe Kohli's incredible cricketing. 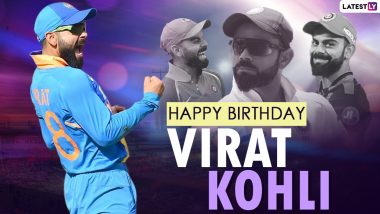 Twitterati went absolutely berserk as Team India and Royal Challengers Bangalore (RCB) captain Virat Kohli celebrates his 32nd birthday on Thursday (November 5). Born in 1988, the right-handed batsman is widely regarded as one of the greatest cricketers of all time, and his records are nothing short of jaw-dropping. "Throw me to the wolves, and I'll return leading the pack" – this saying is indeed apt to describe Kohli's incredible cricketing. From playing a fiery cameo in Mumbai to registering a marathon knock in Melbourne, Kohli rose to every challenge which came his way, shattering one illustrious record after another. Virat Kohli Photos & HD Wallpapers for Free Download.

Kohli burst onto the scenes in 2008 when he led India to the Under-19 Cricket World Cup triumph. Just a few months later, Kohli made his international debut, and a sensational career went underway. With Sachin Tendulkar being in the latter half of his career, Kohli took over the baton and carried forwarded his legacy brilliantly. He only became better with time and gave nightmares to many prominent bowlers all over the world. Along with his batting prowess, the right-handed batsman also proved his mettle in leadership by guiding India to series victories in West Indies, Australia, England, South Africa in New Zealand. His on-field heroics earned a lot of fans who wished the talisman 'Happy Birthday' with heart-whelming messages. ICC Shares Video of Virat Kohli, Steve Smith, Ravindra Jadeja & Other Cricket Stars From ICC Under-19 Cricket World 2008.

Best Of The Lot!!

You Can Hate Him

You Can Troll Him

You Can Abuse Him

The Most Underrated Finisher of All Time @imVkohli #HappyBirthdayVirat pic.twitter.com/neVjELmEzn

Not Fifty or Nor Century but Virat Kohli's these innings is not less than a big century or Greatest innings. "One of the Greatest"🙌.!! #HappyBirthdayVirat @imVkohli🐐 pic.twitter.com/fNrhVj9x2M

"When I made my Comeback, Virat Kohli supported me. Had he not backed me then I wouldn't have

made a comeback. Praises Virat Kohli for supporting him in the final stage of his career." - Yuvraj Singh

As of now, Kohli is participating in the Dream11 Indian Premier League (IPL) 2020 and will like to make birthday more special by guiding RCB to their maiden title. Bangalore have already qualified for the playoffs, but they need three straight wins to end their 13-year-long jinx.

Scoring 460 runs in 14 games, the birthday boy has also been in decent form. However, he has to unleash his best to guide his side across the knock-out stages. Meanwhile, RCB will next take the field against Sunrisers Hyderabad in the eliminator at the Sheikh Zayed Stadium in Abu Dhabi on November 6.

(The above story first appeared on LatestLY on Nov 05, 2020 12:00 AM IST. For more news and updates on politics, world, sports, entertainment and lifestyle, log on to our website latestly.com).