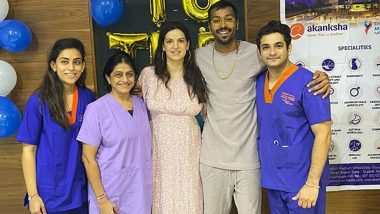 Hardik Pandya and Natasa Stankovic welcomed their first child on Thursday (July 30, 2020) and the Indian all-rounder took to his social media to break the news to his fans. ‘We are blessed with our baby boy’ wrote the 26-year as he shared a photo while holding the hands of his son. And now the cricketer has thanked all the staff members of the hospital where his kid was born. Hardik Pandya Gifts Red Roses to Wife Natasa Stankovic, Thanks Her for ‘Best Ever Gift!’ (See Picture).

The Indian all-rounder, almost after a week from the birth of his son, took to social media to express his gratitude toward the doctors and nurses of Akansha Hospital and thanked them for bringing his baby into the world. Hardik Pandya Son New Pic: Indian All-Rounder Holding Baby Boy in Hospital Ward is Too Cute, Calls Newborn 'The Blessing By The God' Tagging Nataša Stanković!

‘Special thanks to Akanksha hospital in Anand! Last one week you guys made sure we have our home away from home! @niketunited @drmolinapatel @dr.nayanapatel you guys are absolute gems. Bringing my baby in this world! Will be grateful forever’ the Indian all-rounder wrote on his Instagram post.

Special thanks to Akanksha hospital in Anand! Last one week you guys made sure we have our home away from home! @niketunited @drmolinapatel @dr.nayanapatel you guys are absolute gems 🙏🏾❤️ Bringing my baby in this world! Will be grateful forever 🙏🏾

Hardik Pandya for the past week has been engaged in dad duties and seems to be enjoying the new responsibilities. A few days ago the cricketer shared a photo of himself after shopping for baby diapers. ‘Baby's diapers are on the way’ the 26-year-old captioned his post. Hardik Pandya Begins Dad Duties, Goes Shopping for Baby Diapers.

Hardik Pandya and Natasa Stankovic shocked the world after they announced their engagement on New Year’s 2020. The Indian cricketing superstar proposed the Serbian actress on a yacht and the couple reportedly got married during the lockdown.

Speaking of Hardik Pandya on the field, the 26-year-old is expected to make his competitive return from injury during IPL 2020 when Mumbai Indians start their title defence. The cash-rich league will be played from September 19 in UAE.

(The above story first appeared on LatestLY on Aug 05, 2020 05:33 PM IST. For more news and updates on politics, world, sports, entertainment and lifestyle, log on to our website latestly.com).