In addition to the injury woes that have plunged their plans into uncertainty, Australia are also without a settled opening pair ahead of the first Test match. Joe Burns is the only fit opener available but horribly out of form. David Warner has been ruled out of the first Test due to a torn abductor muscle. 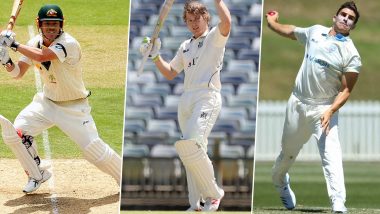 Australia’s Test plans was thrown into further disarray after young pacer Sean Abbott was ruled out from the first Test match in Adelaide with a calf strain. India vs Australia pink-ball Test match will begin on November 17 (Thursday). But the home side have been hit by repeated injuries ahead of the start of the Test leg of this IND vs AUS 2020-21 tour. Abbott is the latest addition to a long growing injury list for the home, who have at least four players out with injuries ahead of the first Test. All-rounder Moises Henriques was added to the Australia squad for the first Test on Monday after Abbott was ruled out with injury. AUS vs IND 1st Test 2020: Moises Henriques in, Sean Abbott Out of Australia Squad for Adelaide Game.

In addition to the injury woes that have plunged their plans into uncertainty, Australia are also without a settled opening pair ahead of the first Test match. Joe Burns is the only fit opener available but horribly out of form. David Warner has been ruled out of the first Test due to a torn abductor muscle while his likely replacement Will Pucovski has been ruled out with a concussion after being hit on the helmet by a bouncer in the first warm-up game. Cameron Green also added himself to the concussed list before Abbott was ruled out of the first Test with an injury. Take a look at the list of Australian players ruled out with injuries. Allan Border Slams Australia A's Performance Against India, Calls It Absolute Disgrace.

Australia have been hit by injuries ahead of the Adelaide Test. Warner is out due to groin injury. Will Pucovski was certain to make his debut but suffered concussion (9th in his career). Cameron Green suffered concussion & Sean Abbott has calf strain. Joe Burns is out of form

Warner limped off the field in the second ODI match against India at Sydney after hurting himself while fielding. Reports later said Warner had torn his right abductor muscle and was ruled for the remainder of the ODI series and also the T20I series. He is likely to be available for the second Test.

The 22-year-old was a likely replacement for Warner in the opening Test. But was hit on the helmet off a Kartik Tyagi delivery bouncer in the first warm-up game and had to be replaced after he suffered a concussion. Pucovski was ruled of the first match after suffering his ninth concussion. He, like Warner, could be available for the second Test.

Sean Abbott bowled only seven overs and did not take the field after Test on day 2 of the second practice match. It was later revealed he had complained of tightness in his calf. Abbott was eventually ruled out of the first Test due to a side strain.

Green suffered a concussion after taking a blow on the head off his own bowling during India’s innings in the second practice game. Jasorit Bumrah’s straight drive hit Green on the head and sent him to the floor and although he appeared to be fine, Green was eventually ruled out of the match due to concussion. He has reportedly recovered and is likely to be in contention for the opening Test match.

Plagued by injuries and a fit but out of form opener, Australia head to Adelaide for the opening Test match against India. Marcus Harris though showed great touch and could be in the playing XI while veterans Shaun Marsh and Usman Khawaja could also receive call-ups if the team decide to drop Joe Burns after an indifferent form in the warm-up matches.

(The above story first appeared on LatestLY on Dec 14, 2020 11:28 AM IST. For more news and updates on politics, world, sports, entertainment and lifestyle, log on to our website latestly.com).