2022 has been a year when the heat in New Delhi, the capital of India, went at a different level altogether. With temperatures breaching 45 degrees on certain days, life in Delhi has been a tough test, especially when people are outdoors. 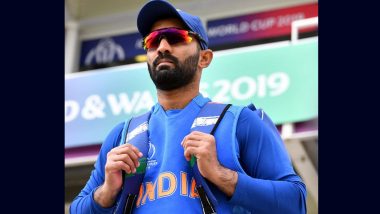 New Delhi, June 8: 2022 has been a year when the heat in New Delhi, the capital of India, went at a different level altogether. With temperatures breaching 45 degrees on certain days, life in Delhi has been a tough test, especially when people are outdoors. Amidst the heatwave, India are coming back to international action after two intense months of IPL 2022, as the road to preparation for the Men's T20 World Cup resumes with the opening game of the five-match series against South Africa at the Arun Jaitley Stadium on Thursday. For the hosts, the next 10 days of T20I action against a full-strength Proteas is a chance to test a new-look top-order sans Rohit Sharma and Virat Kohli as well see how the returning duo of Dinesh Karthik and Hardik Pandya fit in India's scheme of things in the shortest format of the game. IND vs SA Preview: Likely Playing XIs, Key Battles, Head to Head and Other Things You Need To Know About India vs South Africa 1st T20I 2022.

Karthik hadn't played for India in T20Is since February 2019. But scintillating performances as a specialist finisher for Royal Challengers Bangalore (RCB) in IPL 2022, amassing 242 runs at a strike rate of 220 in the death overs phase, paved the path for a comeback into the national team after three years. Head coach Rahul Dravid had hinted at Karthik continuing to play the specialist finisher role, he did at RCB, for the Indian team. "It's very clear that he has made a comeback based on the skills that he has shown in a particular phase of the game. At that backend, Dinesh has really been able to show great consistency for the last 2 to 3 years. "He has been able to make a difference in whichever team he has played. I don't see it any different and that's why he has been picked. He has been picked to bat in that kind of position and see whether he can replicate those kind of performances for India."

On the other hand, Pandya is tipped to be seen in Indian jersey after being last seen in the 2021 Men's T20 World Cup. At that time, with concerns over him bowling his full quota of overs, Pandya played mainly as a batter while bowling few overs in Super 10 stage. But, in IPL 2022, Pandya turned a corner, amassing 487 runs in 15 matches at an average of 44.27, with four half-centuries apart from picking eight wickets and leading Gujarat Titans to IPL 2022 trophy. Now, back in the Indian scheme of things, the all-rounder arrives in the T20I series against South Africa oozing confidence. But Dravid dropped hints that Pandya might play a different role for India after gaining success as an all-rounder, especially as a number four batter, for the Titans' in IPL 2022. "It's really pleasing to have him back. Hardik at his best is a fantastic cricketer with the bat and ball. We have seen that with India in the past. Obviously, he has been successful in white-ball cricket and has shown really good form in this IPL.

"Without giving too much away about the batting orders before the game starts, sometimes the roles that you play with the franchise match, the roles that you play for India... but sometimes you have to play different roles for different teams." Though Dravid appreciated the exuberance which Umran Malik and Arshdeep Singh bring to the team, it seems that India will stick with the pace trio of Bhuvneshwar Kumar, Harshal Patel and Avesh Khan for the opening match. There could be toss-ups between Ruturaj Gaikwad and Ishan Kishan for who opens with captain KL Rahul, and between Axar Patel and Kuldeep Yadav with Yuzvendra Chahal, a sure spin starter. IND vs SA, 1st T20I 2022: Kuldeep Yadav Can Turn Around the Game in Middle Overs, Says Rahul Dravid.

South Africa, meanwhile, are playing together as a unit for the first time since they missed out on a semifinal spot in the T20 World Cup last year in the UAE despite winning four matches in Super 10 stage. Majority of the members in their squad are well-versed with Indian conditions, with 10 players being members of various franchises in IPL 2022 and not having lost a bilateral T20I series in India. David Miller had his best IPL season with 481 runs at an average of 68.71 and strike rate of 142.72 for Gujarat. The number five spot, improved play against spin and role clarity meant Miller remained unbeaten in nine matches for the Titans.

Captain Temba Bavuma will be expecting him to don the same role for the Proteas, while Aiden Markram and Rassie van der Dussen complete the middle-order. The interesting thing to look out for South Africa will be on who pairs up with Quinton de Kock at the top. The visitors look sorted on the bowling front with Kagiso Rabada to lead the pace attack after picking 23 wickets for Punjab Kings in IPL 2022 while Anrich Nortje, Lungi Ngidi and Dwaine Pretorius are other fast-bowling options in the side. Tabraiz Shamsi and Keshav Maharaj should lead the spin challenge for the Proteas.

(The above story first appeared on LatestLY on Jun 08, 2022 12:12 PM IST. For more news and updates on politics, world, sports, entertainment and lifestyle, log on to our website latestly.com).