India head coach Rahul Dravid hailed the return and re-emergence of Kuldeep Yadav into the national side, saying the left-arm spinner can change the scenario of the game in middle overs. 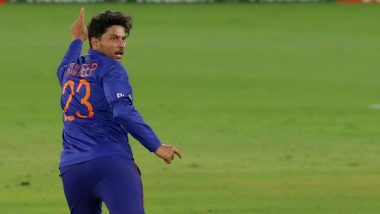 New Delhi, June 7: India head coach Rahul Dravid hailed the return and re-emergence of Kuldeep Yadav into the national side, saying the left-arm spinner can change the scenario of the game in middle overs. Kuldeep picked up 21 wickets for his new franchise Delhi Capitals in IPL 2022 after Kolkata Knight Riders released him ahead of mega auction and was adjudged Player of the Match four times. "It's nice to have Kuldeep back in the mix. He had that (knee) injury unfortunately in the last IPL (which needed surgery), and in fact even without playing any first-class cricket, we got him back into the mix because we see the quality. IND vs SA, 1st T20I 2022: Rahul Dravid Impressed With Umran Malik; but Unsure of Giving Him Chance Against South Africa.

"He has been a terrific performer. We know that the kind of quality he brings, people find very difficult to read. He is a wicket taker. So there are a lot of positives of having Kuldeep in the group," said Dravid in the press conference. "He is one of the really exciting options that we have, along with Ravi Bishnoi who has come and done really well. Yuzi (Yuzvendra Chahal) has really shown his class over the last six months for us and for his IPL team, both the last two IPLs that he has played. Axar (Patel) is again an allrounder."

"So there a lot of options and sometimes you have to balance out those options as well. But very nice to see Kuldeep back again and bowling. And we know that at times he is someone who can turn the game around with wickets in those middle overs," further explained Dravid. Asked about the make-up of top three ahead of India's first T20I against South Africa at the Arun Jaitley Stadium on Thusday, in the absence of Rohit Sharma and Virat Kohli, Dravid remarked, "We know our top three's quality. They are top class. There will be a slightly different top three in this series but what we are looking for (overall) is good positive start and playing according to the situation." IND vs SA Dream11 Team Prediction: Tips To Pick Best Fantasy Playing XI for India vs South Africa 1st T20I 2022 in New Delhi.

"If it's a high-scoring game, then obviously you want your players to maintain the strike-rate. If wicket is more challenging, then they have to respond to that as well." Dravid asserted that role clarity for the top-order batters will be essential from the team think-tank. "In general, in T20 you want people to play positively and these people do that. As I said their roles might be slightly different to what we expect of them." "We will be giving them a lot of clarity as to what their roles are. And I'm confident anyone in the top three will be able to play the role according to the situation of the match."

(The above story first appeared on LatestLY on Jun 08, 2022 10:58 AM IST. For more news and updates on politics, world, sports, entertainment and lifestyle, log on to our website latestly.com).