IND vs SL 2021: Netizens React As Devdutt Paddikal Misses Out on Debut in Third ODI

The Karnataka youngster has been one of India's most consistent performers in domestic cricket and fans had expected him to make his ODI debut in third match against Sri Lanka on July 23, with five other new players being named in the playing XI. 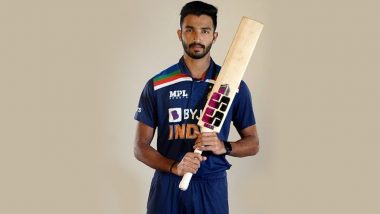 He was expected to make his ODI debut today, given the fact that India have already won the series 2-0 and the Men In Blue would predictably give their bench players an opportunity in the game. Fans were unhappy with Paddikal missing out and here are some of their reactions on Twitter.

Now you can understand why Rahul Dravid running agenda against Devdutt Paddikal pic.twitter.com/cy9IIQqVtY

This fan wasn't impressed by this decision at  all:

5 players are making debut today and Devdutt isn't one of them. Wtf 😭😭

While this user was visibly disappointed:

This user came out with all the numbers:

This user suggested Shikhar Dhawan should have sacrificed his spot:

It would have been great if Shikar gave his place to Devdutt .

Despite Paddikal missing out to make a debut in the third ODI, he is widely expected to make his T20I debut when India take on Sri Lanka in the shortest version of the game, starting 25th July.

(The above story first appeared on LatestLY on Jul 23, 2021 05:14 PM IST. For more news and updates on politics, world, sports, entertainment and lifestyle, log on to our website latestly.com).