India defeated England by 7runs in the third and deciding ODI to win the series 2-1. Chasing 330 England lost wickets at regular intervals, but the scoring rate was never down. Sam Curran ed England’s battle single-handedly as the game looked slipping away from India’s grasp. However, the Men in Blue held their nerves in the end overs and emerged victorious in the end. 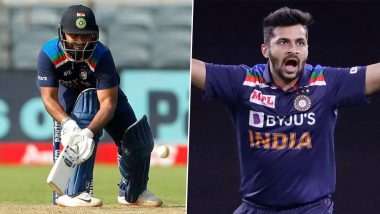 After some mind-boggling action between the bat and ball, India defeated England by seven runs in the third and deciding ODI, winning the series 2-1. Chasing 330 in the deciding clash, England lost wickets at regular intervals, but the scoring rate was never on the lower side. However, the result looked a mere formality when the Three Lions lost eight wickets inside 260 runs. However, Sam Curran didn’t put his guards down and made a terrific fight back. He led England’s battle single-handedly as the game looked slipping away from India’s grasp. However, the Men in Blue held their nerves in the end overs and emerged victorious in the end. India vs England Highlights of 3rd ODI 2021.

Earlier in the game, Indian skipper Virat Kohli lost yet another toss as England opted to bowl on a batting-friendly track. The home team got off to a sensational start with openers Rohit Sharma and Shikhar Dhawan adding over 100 runs inside 14 overs. However, the momentum suddenly swung in England’s favour, with India losing four quick wickets. Nevertheless, Hardik Pandya joined forces with Rishabh Pant, and the duo made a mockery of England’s bowling line-up. Both dashers scored quick-fire fifties as the Men in Blue looked cruising towards the 350-run mark. However, the visiting team’s bowlers made an emphatic comeback in end overs as India got bundled out for 329, which just proved to be enough. Now, let’s look at the stat highlights of the game. Virat Kohli Reacts to His Sensational Catch During India vs England 3rd ODI 2021.

# For the first time since 1976, seven different bowlers took wickets against India in an ODI match.

# Curran now has the highest score by a number eight batsman in ODIs (95).

The focus now shifts to the Indian Premier League (IPL) 2021, which gets underway on April 9. Majority of the players who participated in this series will ply their trade in the gala T20 tournament and would be determined to make a statement with the ICC T20 World Cup scheduled to take place later this year.

(The above story first appeared on LatestLY on Mar 28, 2021 10:45 PM IST. For more news and updates on politics, world, sports, entertainment and lifestyle, log on to our website latestly.com).