Virat Kohli's side would be eyeing vengeance for their agonising 18-run defeat in the World Cup semi-final two years ago while New Zealand emerged victorious 2-0 the last time these two sides squared off against each other in a Test series in 2020. 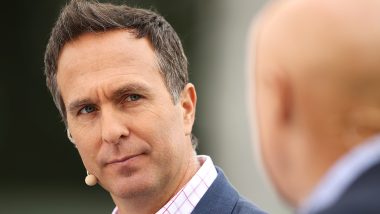 The World Test Championship final is right on the cards and former England cricketer Michael Vaughan has already picked his favourite to win the coveted title. Virat Kohli's side would be eyeing vengeance for their agonising 18-run defeat in the World Cup semi-final two years ago. New Zealand emerged victorious 2-0 the last time these two sides squared off against each other in a Test series. India vs New Zealand, WTC Final 2021 Date, Match Timing, Venue, Squads, Broadcast Rights and All You Need to Know.

"New Zealand (will win). English conditions, the Duke ball, and India on the back of a busy schedule… they’ll arrive pretty much a week before and go straight into it, [and] New Zealand have two test matches, you could argue warmups against England to get them prepared for the final.

"So it’s quite an obvious one for me, New Zealand will be better prepared and they’ll have more of a group of players who’ve played more cricket with the red ball, particularly the Duke ball here in the UK. New Zealand, all the way," Vaughan, while talking to Spark Sport, said. What if ICC WTC Final, India vs New Zealand, is Washed Out or Ends in a Draw? Who Takes the World Test Championship Trophy?

New Zealand have already reached England and would get some much-needed match practice for the final while India are yet to do so. Vaughan also went on to talk about this New Zealand team potentially being the best side in history. The 46-year old thinks that there is something different about this side that sets it apart from the others.

"It’s not difficult, you haven’t had many great teams. You’ve had great players, you go back to the 80s, Richard Hadlee and Martin Crowe were up there with the greatest to have ever played test match cricket. As a team, Brendon McCullum’s team were exciting and vibrant but I never felt they were consistent because they let the opposition in by playing so aggressively," the former England captain stated.

The World Test Championship final is slated to be played from June 18-22 in Southampton and it promises to be a riveting battle between both these sides. The Kiwis were the first to make the final while India got the better of England in the fourth Test in Ahmedabad, earlier this year to seal their spot in the summit clash.

(The above story first appeared on LatestLY on May 19, 2021 06:26 PM IST. For more news and updates on politics, world, sports, entertainment and lifestyle, log on to our website latestly.com).