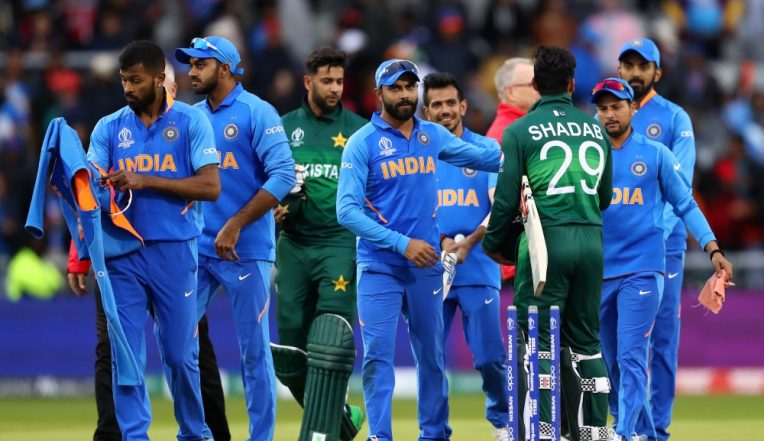 India and Pakistan took on each other today at the Old Trafford Ground, in Manchester in the CWC 2019 match and once again, India had the last laugh as Virat Kohli and team won the game by 89 runs by DLS method. After winning the toss, Pakistan elected to bowl first. Everything went in India’s way right from the first ball. Opener Rohit Sharma was on the attacking mode right the beginning, whereas, KL Rahul who had batted in the opening slot after a while was a little watchful. India vs Pakistan Live Cricket Score of ICC World Cup 2019 Match.

Both brought a 136-run stand for India. After the departure of KL Rahul on 57 runs, Sharma stayed and scored 140.  Virat Kohli also scored a half-century and made way to the pavilion on 77 runs. Titbits from others, helped the team reach a total of 336 runs. The rain did play a spoilsport for a while but the game continued. Pakistan lost their first wicket quite early in the game in the form of Imam-Ul-Haq who made way to the pavilion on the score of seven. Fakhar Zaman and Babar Azam did try to stabilise the innings but Kuldeep Yadav snapped the wicket of the latter and broke a 104 run long partnership. Shahid Afridi Congratulates Team India And BCCI For Win Before IND vs PAK World Cup 2019 Match Result is Out.

The team lost three quick wickets in the form of Mohammed Hafeez, Shoaib Malik and Sarfaraz Ahmed. With this once again the doors of the heaven opened up and the match was reduced to 40 overs and the target was revised to 302 runs. In the end, Imad Wasim and Shadab Khan remained not out but it was obviously impossible for both the batsmen to take the team to the finishing line. India finally won the game by 89 runs.

Now, let’s check a few stats of the match:

# Rohit Sharma and KL Rahul's 136-run stand was the first century-run partnership for an Indian opening pair against Pakistan at the World Cups.

# This was also the fifth time an opening pair has registered 100+ run partnership against Pakistan at World Cups.

Rohit Sharma was made the Man of the Match for his knock. India will next take on Afghanistan on June 22, 2019, at the Rose Bowl Cricket Ground in Southampton.