India vs South Africa 2021–22: Sunil Gavaskar Lashes Out at Rishabh Pant for Irresponsible Dismissal on Day 3 of 4th Test in Johannesburg

The left-hander, in an attempt to attack Rabada, ended up edging the ball to the wicketkeeper behind and Gavaskar, who was commentating at that point of time, criticised the batter for throwing away his attack. "No excuses for that shot. Absolutely no nonsense about his natural game about this one," he said. 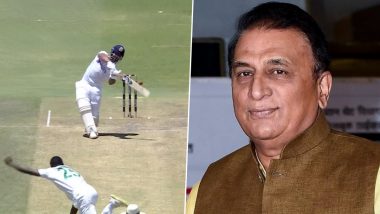 Sunil Gavaskar was not a happy man and had some harsh words of criticism for Rishabh Pant after the wicketkeeper-batsman threw his wicket away during Day 3 of the second Test match between India and South Africa. The visitors began well with Ajinkya Rahane and Cheteshwar Pujara both scoring half-centuries and it looked like India were running away with the game when Kagiso Rabada struck to remove both these batsmen in quick succession. Pant, who came out to bat after Hanuma Vihari, decided to take on a rampaging Rabada on the third ball he faced, a move that saw him lose his wicket and put India in a spot of bother before lunch. KL Rahul & Dean Elgar Get Into a Heated Argument After Indian Captain's Dismissal During IND vs SA 2nd Test 2022 Day 2 (Watch Video)

Gavaskar, who was on commentary during this dismissal, expressed his disappointment clearly. He said, "No excuses for that shot. Absolutely no nonsense about his natural game about this one. There has to be some sense of responsibility. Guys like Rahane have taken the blows. Guys like Pujara have taken it on their body, so you also fight it out." The left-hander, batting on 0, danced down the track and decided to take on Rabada but instead, ended up edging one to the wicketkeeper behind. Such a shot was definitely not needed at that stage as India would have needed him and Vihari to put together some runs and take the score close to a defendable total.

Miffed with his dismissal, he also said that there would not be "any kind words" for the wicketkeeper-batsman in the dressing room after this horrible dismissal.

(The above story first appeared on LatestLY on Jan 05, 2022 04:49 PM IST. For more news and updates on politics, world, sports, entertainment and lifestyle, log on to our website latestly.com).