India vs South Africa 3rd Test 2019: Faf du Plessis vs Ravindra Jadeja & Other Exciting Mini Battles to Watch Out for in Ranchi 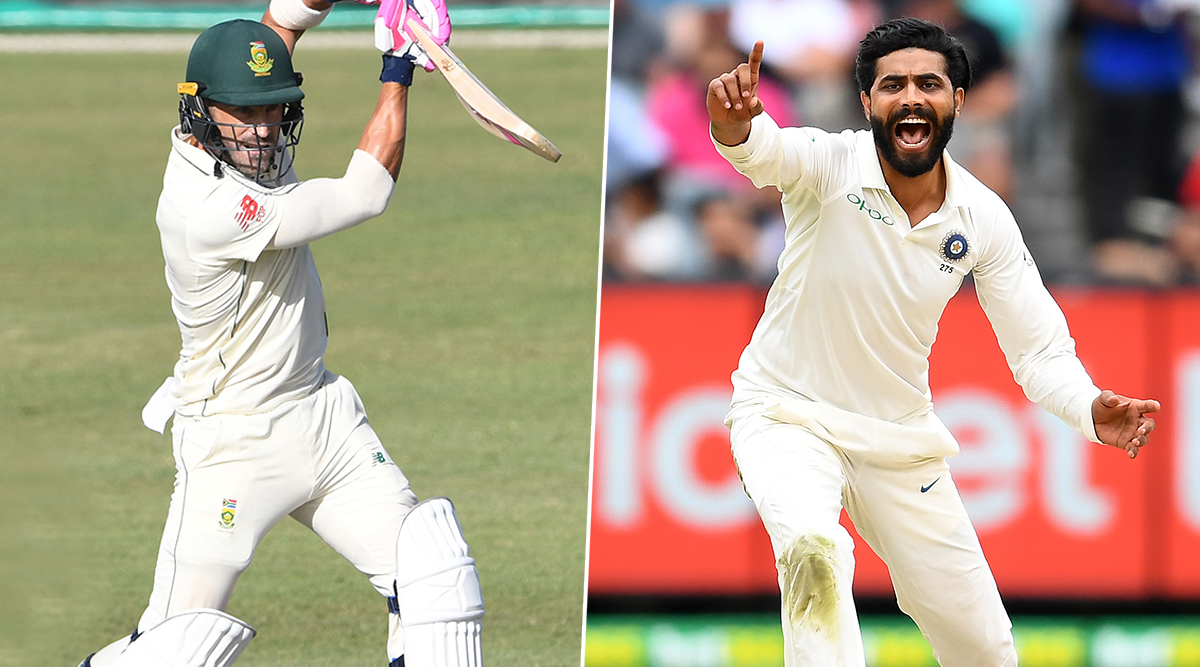 India will look to continue their dominance over South Africa in the third and last Test and clinch the series 2-0. The match will be played at the JSCA International Stadium Complex in Ranchi on October 19. The Virat Kohli led side to produce a clinical performance in the first two matches of the series and are favourites to win the third clash too. In the second Test, skipper Virat Kohli and Mayank Agarwal were the standout performers for the hosts and played an instrumental role in sides’  innings and 119-run victory. Some Proteas players like Kagiso Rabada and Faf du Plessis also showcased their capabilities in the side’s rather poor. The second match witnessed some fierce battle between the bat and the willow and we’ll be focusing some more mini-battles which can be witnessed in the upcoming match. India Vs South Africa, Cricket Score 3rd Test Match.

The second in Pune saw a flurry of records crashed by the Indian team which left the opposition awestruck. India just didn’t take an unassailable 2-0 lead but also became the first side to win 11 consecutive Test series at home. Virat Kohli, who scored a splendid double ton in the previous match, is in stellar form and will be the opposition’s biggest threat. For South Africa, players like Quinton de Kock and Kagiso  Rabada will have to step up in order to change the teams' fortune. Meanwhile, let’s look at some mini-battles which can be witnessed in third India vs South Africa Test.  Aiden Markram Ruled Out of India vs South Africa 3rd Test 2019 Due to a Wrist Injury.

The Indian captain seemed unstoppable in Pune and will aim to extend his purple patch in the last match of the tour.  Kohli is just one rating point behind Steve Smith in the ICC Test batting ranking and a decent show in the third Test might take Virat Kohli at the pinnacle. For Proteas, Kagiso Rabdada has delivered some good spells and will have the onus to dismiss the Indian captain.

The Chennai Super Kings teammates will look to outplay each other in the Ranchi Test. Jadeja has been in sensational form in the Test series and has also troubled the Proteas throughout the Test series. On the other hand, Du Plessis has played some gritty knocks but failed to convert it into a big score. Jadeja has dismissed Du Plessis in the first Test and will look to get better of the batsman one more time.

After warming the benches in the Test series against West Indies, Ashwin made an impeccable come back and is currently the highest wicket-taker in ongoing series. While De Kock, who has registered a ton in the first Test, has shown great resilience in the series. However, Ashwin has dismissed Quinton de Kock twice in the previous matches and will look to outfox the southpaw once again.

India are the number one ranked Test side at the moment and are also at the top In the points table of ICC World Test Championships. On the other hand, Faf du Plessis and Co will want to learn from their and mistakes and put up a better show in the Ranchi Test.