Indian Cricket Team Schedule in 2019: List of Series to be Played by Team India Including ICC Cricket World Cup

The Future Tour Program (FTP) of the Indian team has once again come up with a jam-packed schedule which is bound to test the calibre and fitness of the team. 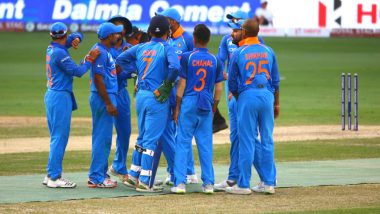 The Indian Cricket team is one of the most marketable teams in the world and its tours and travels are subject to quite a frenzy from both fans and sponsors alike. In 2018, the team had quite an eventful year with tough away series against England and Australia and some fairly easy ones at home like the one against  West Indies. The coming year is crucial for the Men in Blue because it is a World Cup year and that is a priority for any team. The Future Tour Program (FTP) of the Indian team has once again come up with a jam-packed schedule which is bound to test the calibre and fitness of our team. Let us have a quick glance at the timetable of the Indian Cricket Team. Virat Kohli’s Magnificent Show in South Africa, Dinesh Karthik’s Last-Ball Six and Other Highlights of Indian Cricket in 2018.

India’s tour of New Zealand ( January–February): After completing the Test series in Australia, team India will travel to New Zealand to take on the Kiwis in a 5 ODI and 3 T20 games series. There is not a single Test lined up against the Black Caps which means the Test specialist will leave for India once their duty is finished in Australia. The decision to have no Tests was due to the fact that an early morning game starting 3.30 AM IST will generate little revenue. The ODI series begins in Napier on the 23rd of January. The last time India visited New Zealand, they were humbled 4-0 in a five-match ODI series so they will have to be at the best to reverse their fortunes in 2019. The T20 series begins on the 6th February in Wellington followed by one on the 8th February in Auckland while the final game of the tour is scheduled to take place on the 10th February in Hamilton.

Home Series against Australia (February–March): The Test specialists will not find themselves called into action any time soon after the New Zealand tour as the Australians come visiting India for a 5 ODI and 2 T20 series. India has done well of late against Australia at home in limited overs format and it looks the trend will continue in 2019 too. Mohali, Hyderabad, Nagpur, Delhi, and Ranchi are the five venues for the 50 over format games starting the 24th of February. Bengaluru will host the first T20 game against the Oz 10th March followed by a T20 game at Visakhapatnam on the 13th of March.

Home Series against Zimbabwe (April): It has been ages since a Zimbabwe side visited India but that wait is going to end in April 2019 with the African nation visiting India for a three-game T20 series. It is highly likely India will field its B team to face the Zimbabweans as more details are awaited about this series.

2019 ICC Cricket World Cup (May–July): It does not get any bigger than the World Cup for any cricketer representing his nation and for Virat Kohli and his men it is not different. They will be in England looking to claim their third World Cup crown. They open their account against South-Africa on 5th June in Birmingham followed by another massive game, this time against Australia on 9th June in London. The other group games involving the Men in Blue includes New Zealand on June 13, arch-rivals Pakistan June 16, Afghanistan June 22, the West Indies June 27, England June 30 and the last group game is against Sri Lanka on the 6th of July. If India is able to overcome all these barriers, it will play a final on July 14 at the iconic Lords stadium. AFC Asian Cup, ICC Cricket World Cup and Other Top Sporting Events to Look Forward to in 2019

India’s tour of West Indies (July – August): India travels to the West Indies post the exhausting World Cup in England as part of the World Championship to play two Test matches. In addition to the Tests, they will also play 3 ODI and 3 T20 games as part of the tour. The opening two T20 games will be played at the Central Broward Regional Park in Lauderhill, Florida as an effort to promote the game in the USA. Apart from this, the tour is significant as India open their account in the Test Championship that is scheduled to run until 2021.

Home Series against South Africa (October November): The South African Cricket team will be visiting India towards the later part of 2019 to take on India in a three-match Test series. It will be one of the keenly contested Test series of the year as some of the best players on the planet lock horns. The last time the Proteas visited India they were embarrassed 3-0 in a four-Test series where Ravindra Jadeja and Ravichandran Ashwin were the destructors in chief. It will be interesting to see how South Africa prepares for this tough battle.

Home Series against Bangladesh (November December): The Bangladesh tour of India will once again fuel the rivalry between the two sets of fans who have had some real go at each other in the past few years. The resurgence of Bangladesh cricket means the games have not been one-sided like it used to be and one can expect this series to be no different. The Bangla Tigers come here for 2 Tests and 3 T20 games which will be played in the months of November and December 2019. As is the case with India playing at home, even series with India as clear favourites still generate a lot of money. Cricket Controversies in 2018: From Virat Kohli's 'Leave India' Comment to Steve Smith's Ball-Tampering Scandal, Here Are All Incidents That Rocked Gentleman's Game This Year!

Home Series against West Indies (December): The West Indies tour of India will mark the end of the 2019 season for Indian cricket. Hosts India will play 3 ODI and 2 T20 games against the boys from the Caribbean. The tour is interesting, to say the least as it would be the second bilateral series between the two in 2019 and this after India ran riot against the same opponents at home this year. The board may look to give youngsters a chance to flourish just like they did in the recently concluded series.

This is how the Indian Cricket Team will be involved in games in 2019 and it is a mixture of home and away games. They will need a large pool of players to cope up with such grueling schedule which also opens up opportunities for players.

(The above story first appeared on LatestLY on Dec 27, 2018 02:50 PM IST. For more news and updates on politics, world, sports, entertainment and lifestyle, log on to our website latestly.com).