The day 23 of the IPL 2018 brings a Super Sunday for all the fans of the Indian Premier League. 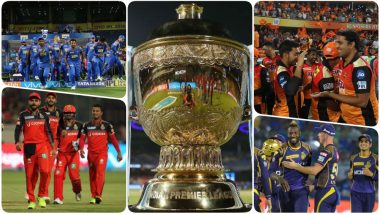 The day 23 of the IPL 2018 brings a Super Sunday for all the fans of the Indian Premier League. The match number 28 is the contest between Rajasthan Royals and Sunrisers Hyderabad which is going to be held at the Sawai Mansingh Stadium, Jaipur. The second match of the day 28 is between Royal Challengers Bangalore and Kolkata Knight Riders. Virat Kohli’s men will be hosting the men in Chinnaswamy Stadium.

The last time the SRH played Rajasthan Royals in Hyderabad, the Orange Army won the match by 9 wickets. Whereas, it has KKR won the match with Royals Challengers Bangalore by 4 wickets at the Eden Gardens. Before we talk about the double-headers today, let’s talk about the match between Mumbai Indians and Chennai Super Kings in Pune.

This is the second time that Rajasthan Royals and Sunrisers Hyderabad lock horns with each in the IPL 2018. The last time the two met each other the contest turned out to be a low-scoring game which the Sunrisers won convincingly. Even Royal Challengers Bangalore and Kolkata Knight Riders met for the second time. Kolkata Knight Riders won the match by 4 wickets at the Eden Gardens.

All the 4 teams are eyeing a win to sustain in the IPL 11 as they are looking forward to qualifying for the playoffs. According to us, the match number 28 will be won by Sunrisers Hyderabad as they had lost their last match and they would want to make a comeback. For match number 29, we place our bets on Royal Challengers Bangalore as they would give it all to win the contest.

A Look at the Points Table

Chennai Super Kings continue to lead the IPL 2018 Points Table followed by Sunrisers Hyderabad and Kings Xi Punjab. All the three have 10 points in their kitty. Kolkata Knight Riders and Rajasthan Royals are placed on number 4 and 5 with 6 points. Royal Challengers Bangalore are placed on 7th position with 4 points.

(The above story first appeared on LatestLY on Apr 29, 2018 02:28 PM IST. For more news and updates on politics, world, sports, entertainment and lifestyle, log on to our website latestly.com).