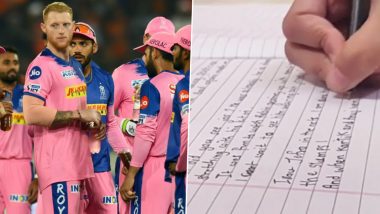 Cricket fans are nothing but ecstatic as the 2020 edition of the Indian Premier League (IPL) is set to get underway on September 19. The marquee T20 tournament is a vital part of India’s cricket calendar as many prominent players from different nations are joining forces to win the title. Hence, ever since the official announcement of IPL taking place was made, fans took to social media and expressed their delight. Recently, Rajasthan Royals also received a heartfelt letter from their ‘special fan’ which would certainly make anyone emotional. Rajasthan Royals Hilariously Trolls Kings XI Punjab Over IPL 2020 Announcements.

Taking to Instagram, the Rajasthan-based franchise shared a video letter in which a little girl expresses what IPL means to her. The little fan said that she started cheering the Men in Pink from the last year and is really looking forward to shout ‘Halla Bol’ again. The girl has also been following the off-field activities of the Royals which is evident in the post. She thanked Steve Smith for giving batting lessons online while Ben Stokes inspired him to do push-ups. Steve Smith Praises Rajasthan Royals Team-Mate Ben Stokes Ahead of Indian Premier League 13.

She also backed Jofra Archer to pack in the upcoming season while the little fan is also excited to see Robin Uthappa donning the Royals jersey for the first time. Fans were enthralled when they came across the emotional message and they filled the comment section with love. Have a look.

Meanwhile, Rajasthan Royals, who won the inaugural edition of the tournament, will chase their second IPL title in the forthcoming tournament. Ben Stokes is in the form of his form and the oppositions must vary him.

Also, the likes of skipper Steve Smith, Jos Buttler and Jofra Archer have been a nightmare for the opposition in international circuit and will aim to make a mark in the gala tournament too. However, they all will have a different challenge this time around as IPL 2020 will take place in UAE.

(The above story first appeared on LatestLY on Aug 04, 2020 12:37 PM IST. For more news and updates on politics, world, sports, entertainment and lifestyle, log on to our website latestly.com).