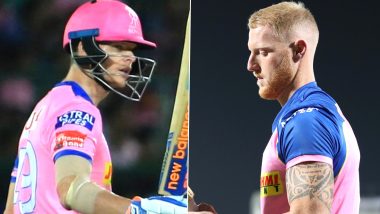 Ahead of the start of IPL 2020, Steve Smith has heaped high [raise of Rajasthan Royals team-mate Ben Stokes. The Australian cricketer labelled the English all-rounder as ‘every captain’s dream’. Ben Stokes, in recent years, has been the most decisive cricketer as the Englishman has played several match-winning knocks to get his team out of tough situations and Steve Smith cannot wait to play alongside him. Emirates Cricket Board Looking to Fill 30–50 Per Cent of Stadiums for Indian Premier League 13.

‘I have seen Stokes go from strength to strength. He had an incredible World Cup and recently played in Test matches. He bowled beautifully and got some wickets as well, He is a player who wants to be involved whether he is batting, bowling or fielding. He wants to be in hotspots. You want these players in team as they want to deliver in tough situations.’ Smith told PTI during the screening three-part docu-series, Inside Story: A Season with Rajasthan Royals. IPL 2020 Squad Updates: AB de Villiers, Ben Stokes, Andre Russell, Lasith Malinga and List of Players Who Could Miss Upcoming Season or Part of it.

Meanwhile, Australia begin their international calendar with a white-ball series against England. While Smith is relishing the opportunity to play at international level once again, he hopes that his Rajasthan Royals team-mates don’t bring their A-game.

‘It will be great to be able to play some competitive cricket against a quality England side which has few of my Royals teammates (Jofra Archer, Ben Stokes and Jos Buttler). Hope they don’t score too many runs or take too many wickets and can save that for the IPL,’ said Smith.

While speaking about playing international cricket for the first time in seven months the Australian said ‘It will be great being back to playing some cricket. We haven’t played a game since February and like most of the world, our country was also shutdown, had to find way to get through this COVID experience which has been incredibly different for everyone.’

(The above story first appeared on LatestLY on Aug 01, 2020 09:48 AM IST. For more news and updates on politics, world, sports, entertainment and lifestyle, log on to our website latestly.com).