Punjab Kings pace bowler Arshdeep Singh has said that it will take some time for the feeling of getting selected in the India T20 squad for the series against South Africa to set in, adding that it is the dream of every cricketer to play for the country. 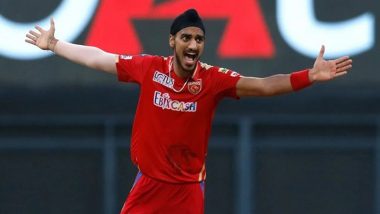 Mumbai, May 23 : Punjab Kings pace bowler Arshdeep Singh has said that it will take some time for the feeling of getting selected in the India T20 squad for the series against South Africa to set in, adding that it is the dream of every cricketer to play for the country. The 23-year-old Arshdeep finished the IPL 2022 season with 10 wickets from 14 matches, with his best being 3/37, and an economy rate of 7.70. He was rewarded for his consistent performance in the domestic season and the IPL by being included in the squad to face the Proteas in the five-match series beginning in New Delhi on June 9. IPL 2022 Records a Total of 1000 Sixes, Highest in Tournament's History.

"(I) Feel really happy that I've been selected in the India team. (I) Came to know about it just before the match against SRH (at the Wankhede Stadium on Sunday). In fact, I came to know about it in the team bus. Yes, it is a pretty exciting feeling. While the match was on, I didn't feel it that much, but when I wake up in the morning (on Monday), I will realise that it is a very special moment," said Arshdeep, who plays domestic cricket for Punjab. "Anyone who starts playing the game, wants to represent the country and I feel quite lucky and grateful about that. I want to keep performing to the best of my ability in the future," he added. IPL 2022: Mayank Agarwal, Bhuvneshwar Kumar Look Back at the Season After Tournament Ends for SRH, PBKS.

The lanky bowler revealed that he had to really work hard on his yorkers, as in a competitive environment like the IPL, or even domestic cricket, it's very difficult for a pace bowler to survive without having the delivery in his arsenal. "I guess (the) credit goes to the management (for him bowling yorkers regularly). They got (some good) batsmen in the (mega) auction, so bowling (to) them in the nets again and again helped me with that delivery... to save yourself from being clobbered (in the nets), the only way out was to bowl yorkers. So, the improvement that you see in my bowling is because of that," said Arshdeep. "Even when I play for Punjab in domestic cricket, there are good players there as well and if you have to perform well, you have to bowl yorkers," added the bowler.

(The above story first appeared on LatestLY on May 23, 2022 11:39 AM IST. For more news and updates on politics, world, sports, entertainment and lifestyle, log on to our website latestly.com).