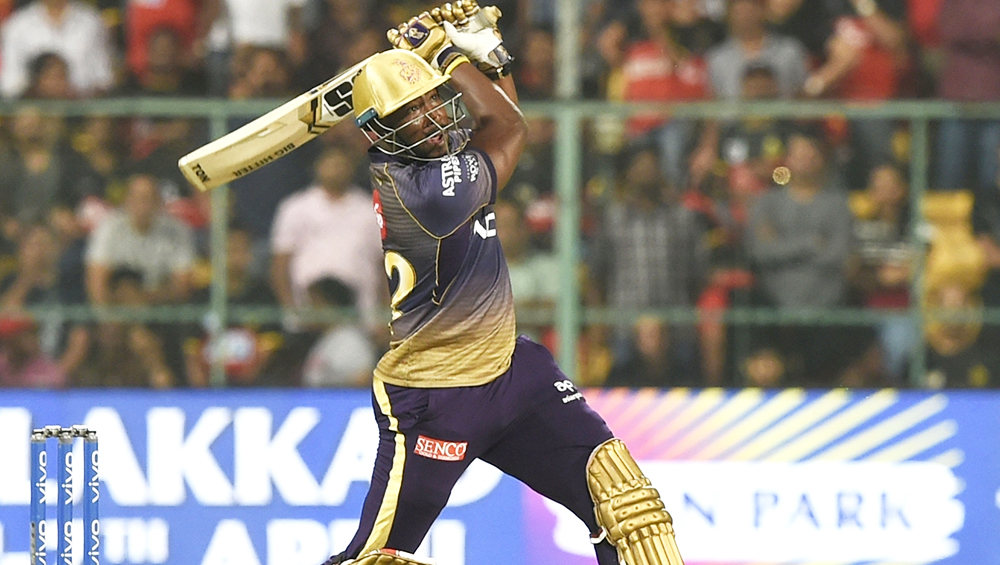 Andre Russell is known as one of the power hitters in contemporary cricket. The right-handed West Indies batsman has featured in various T20 leagues around the world, but his performances in Indian Premier League (IPL) have been top-notch. Russell has played 64 IPL matches and has scored 1400 runs. He made his IPL debut in 2012 and has a career strike-rate of 186.41 in IPL. The Caribbean player apart from his batting skills is a handy bowler as well. Russell, who plays for Kolkata Knight Riders (KKR), has 55 wickets in IPL against his name. Ravi Ashwin Cities His 'Mankad' Incident From IPL 2019 to Urge People to Stay Indoors During 21-Day Lockdown in India.

Meanwhile, as we all are under coronavirus lockdown, let’s have a relook at Russell’s whirlwind knock against Royal Challengers Bangalore (RCB) during IPL 2019. It was a home game for RCB and batting first, they posted 205 for three. Thanks to Virat Kohli and AB de Villiers partnership of 108 runs for the second wicket, RCB posted such a huge total. Kohli and de Villiers were dismissed towards the end with individual scores of 84 and 63 respectively.

In response, KKR ’s chase got off to a bad start as they lost Sunil Narine in the second over. Chris Lynn, Robin Uthappa and Nitish Rana made some valuable contributions to take Knight Riders close to the target. But the required run-rate kept creeping up. Russell came out to bat at number six at the fall of Rana’s wicket and at that time KKR needed 67 runs to win off 26 balls. It certainly was difficult and appeared RCB are nearing the victory. In the next over, KKR lost captain Dinesh Karthik as well, and the equation read 53 to win off 18 balls. Rahul Dravid on Why CSK Always Win and RCB Lose: Former Indian Captain Highlights Stark Difference in Planning of Both the Teams.

With Karthik back in the hutch, there was pressure on Russell to take KKR through. The Caribbean power-hitter opened his arms by smashing Marcus Stoinis for three sixes in the 18th over. In the 19th over, Russell smashed Tim Southee for four sixes and a four, including three back to back maximum hits, to turn the tide in KKR's favour.

Blessing your timelines with some Russell Mania from #VIVOIPL 2019. 😎🙌 #RCBvKKR @Russell12A

Russell ended up scoring 48 off just 13 balls. He slammed seven sixes and a four during his match-winning knock. After the match, KKR’s co-owner and Bollywood actor praised Russell’s dominant batting display and tweeted, “And you guys in the Dugout who said game/set/& match......u may know your cricket but you don’t know @Russell12A !!! WOW u CHAMPION. This calls for Wine my MuscleMan!”

And you guys in the Dugout who said game/set/& match......u may know your cricket but you don’t know @Russell12A !!! WOW u CHAMPION. This calls for Wine my MuscleMan!

In the 2019 edition of IPL, Russell scored 316 runs from 14 matches at an impressive strike-rate of 204.81. He notched four half-centuries, besides picking 11 wickets and was instrumental in helping KKR win many matches. Knight Riders, however, failed to qualify for the playoffs and ended up on the fifth spot on the points table.