IPL Winners List: A Look at All the Previous Champions of Indian Premier League Ahead of 2020 Edition

Among teams yet to win the IPL title, Royal Challengers Bangalore (RCB) have played the final most times. They have reached three IPL finals and have lost all three times. RCB lost to Deccan Chargers in 2009, CSK in 2011 and Sunrisers Hyderabad in 2016. Hyderabad, winners in 2016, lost the 2018 IPL final to Chennai Super Kings. 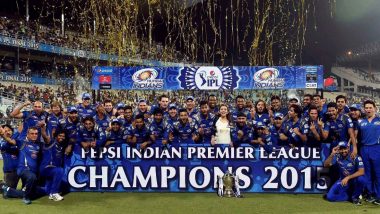 Indian Premier League 13 is set to kick-off from September 19, 2020 (Saturday) with defending champions Mumbai Indians facing Chennai Super Kings (CSK) in the opening match of IPL 2020. The opening match of IPL 2020 will be a repeat clash of last year’s final where Mumbai beat CSK by 1 run to win a fourth IPL title. MS Dhoni-led CSK will be hoping for revenge over MI when they clash in the IPL 2020 tournament opener. IPL 2020 will run from September 19 to November 10 when the final is set to be played. As the start of the T20 franchise league edges closer, take a look at the winners or champions of all previous IPL seasons. IPL 2020 Schedule Time Table for PDF Download Online: Full Match Fixtures With Date, Timings in IST and Venue Details of Indian Premier League 13 in UAE.

Mumbai Indians are the record time winners of the Indian Premier League. They have lifted the prestigious trophy a record four times. Mumbai Indians won their first IPL title in 2013 and has since lifted it every alternate year. They have gone on to win IPL titles in 2015, 2017 and 2019. Chennai Super Kings (CSK) are the next best team with three IPL titles to their name. IPL 2020 Country-Wise Broadcast and Live Streaming Online: Here’s How to Watch Free Telecast of Indian Premier League Season 13 on TV in Pakistan, USA, UAE, Bangladesh and Other Countries.

But when it comes to consistency, MS Dhoni’s team are the best team in Indian Premier League history. CSK have qualified for the final a record eight times and have won the title thrice despite being banned for two years from 2016 to 2017. CSK have lifted the trophy in 2010, 2011 and 2018. They are the only IPL team to successfully defend the title. Most Centuries in IPL: Chris Gayle, Virat Kohli and Other Batsmen Who Have Scored Highest Number of Hundreds in the Indian Premier League.

Kolkata Knight Riders (KKR) with two IPL titles are the third most successful IPL side. KKR won the title in 2012 and 2014. They beat CSK to win the final in 2012 and defeated Kings XI Punjab in 2014 for their second title. The Kolkata-based franchise, however, disappointed since then and have failed to advance to the final even once in the past five seasons. Rajasthan Royals won the title in 2008 becoming the first team to win the trophy. Deccan Chargers, now defunct, had lifted it in 2009. Both beat Chennai Super Kings to win the IPL trophy. Sunrisers Hyderabad won it in 2016. Ahead of IPL 2020, take a look at the all the previous winners of Indian Premier League.

Among teams yet to win the IPL title, Royal Challengers Bangalore (RCB) have played the final most times. They have reached three IPL finals and have lost all three times. RCB lost to Deccan Chargers in 2009, CSK in 2011 and Sunrisers Hyderabad in 2016. Hyderabad, winners in 2016, lost the 2018 IPL final to Chennai Super Kings. Kings XI Punjab are the other team to have played the IPL final. Delhi Capitals are the only IPL team yet to play a final. They will be hoping to break the duck this season when the action begins on September 19.

(The above story first appeared on LatestLY on Sep 16, 2020 04:00 PM IST. For more news and updates on politics, world, sports, entertainment and lifestyle, log on to our website latestly.com).