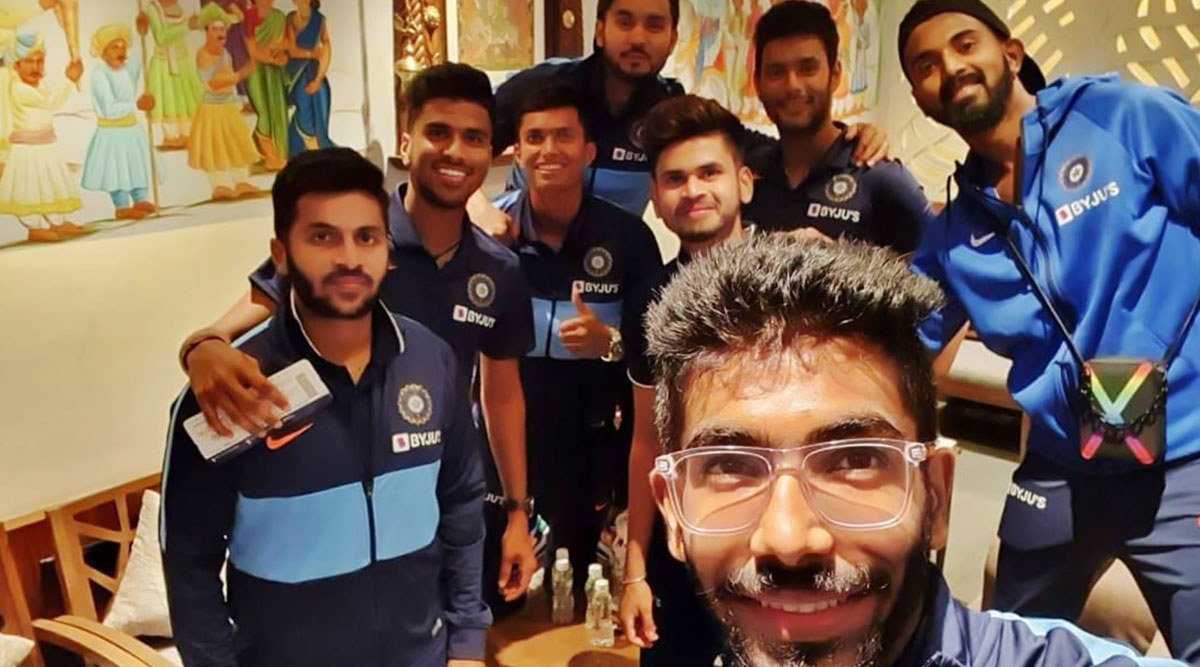 After defeating Australia 2-1 in the recently concluded ODI series, India’s next assignment is in New Zealand. The full-fledged tour consists of 5 T20Is, 3 ODIs and 2 Tests. Well, the Men in Blue must be high on confidence after their recent triumph and that’s exactly what was seen in Jasprit Bumrah’s latest Instagram post. On the eve of India’s departure to New Zealand, the Indian speedster took to Instagram and shared a picture with his teammates. In the groupfie clicked by Bumrah, one can also see Shardul Thakur, Washington Sundar, Navdeep Saini, KL Rahul, Manish Pandey, Shivam Dube and Shreyas Iyer. Jasprit Bumrah Wins Polly Umrigar Award for Best International Cricketer, Shefali Verma Named Best Debutant.

“Next stop: Auckland, New Zealand!” read the caption of the picture posted by the star bowler on the picture-sharing website. Well, Bumrah and Co are certainly excited to take on the Kiwis in their fortress and the hosts must vary them. However, wasn’t able to display a significant show against the Aussies and will look to get back to prime against the Blackcaps. Moreover, the conditions in New Zealand are, generally, tailor-made for fast bowling and thus, one can expect to witness the thunderbolts from the number-one ranked ODI bowler. Meanwhile, let’s look at the picture shared by Jasprit Bumrah. India vs New Zealand 2020 Schedule in IST, Free PDF Download.

Speaking of India Tour of New Zealand 2020, the first of the five T20Is will be played on January 24 at the Eden Park in Auckland. The conditions in New Zealand are quite similar to that of Australia, where the ICC T20 World Cup 2020 will be played. Hence, it is a great opportunity for the Indian side to test their permutation and combination in order to identify their best playing XI ahead of the gala tournament.