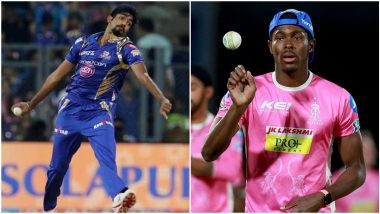 Jofra Archer has entertained his fans with his bowling and power-hitting in IPL 2020. The Barbados-born England pacer has been one of the best fast bowlers in Indian Premier League (IPL) season 13 and is second in the wicket-takers list with 17 scalps to his name. But apart from his bowling and power-hitting, Archer has also been entertaining his fans with his moves on the field. Days earlier, he had given fans a glimpse of his dancing skills by imitating Riyan Parag’s Bihu dance. Against Mumbai Indians, Archer imitated Jasprit Bumrah’s bowling action. Jofra Archer Takes Breathtaking One-Handed Catch to Dismiss Ishan Kishan RR vs MI Clash in IPL 2020 (Watch Video).

Archer, who bowls the first over for Rajasthan Royals, was seen imitating Bumrah’s run-up before play started in the RR vs MI IPL 2020 match. A video of the same was also shared by Indian Premier League on its official social media pages in which Archer can be seen copying Bumrah’s bowling action. In the video, Archer is seen imitating Bumrah’s run-up before the start of the match. Hardik Pandya Shows Solidarity Towards Black Lives Matter Movement, Mumbai Indians Star Shares Picture of Him Taking a Knee.

The Rajasthan Royals pacer, meanwhile, was the pick of the bowlers for his side and returned with figures of 2/31 in four overs. Archer took the important wickets of Quinton de Kock and Saurabh Tiwary and also took a stunning catch to dismiss Ishan Kishan off Karthik Tyagi’s bowling.

Archer, who was stationed at third man, leapt and took a sensational one-handed catch on the boundary line to remove Kishan. Rajasthan Royals went on to win the match by eight wickets with Ben Stokes smashing a match-winning century and also stitching an unbeaten 152-run stand with Sanju Samson to help the Royals chase down 196 in just 18.2 overs and keep their hopes of a playoffs berth alive.

(The above story first appeared on LatestLY on Oct 26, 2020 11:13 AM IST. For more news and updates on politics, world, sports, entertainment and lifestyle, log on to our website latestly.com).