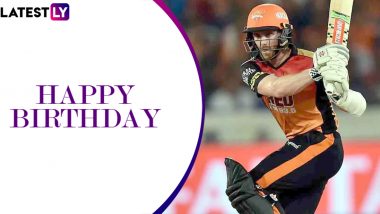 Kane Williamson has played 151 ODIs and 80 Test matches so far, in which he has scored 6173 runs and 6476 runs respectively. Williamson made full-time captaincy debut for New Zealand in ICC T20 World Cup 2016. He also led his side in ICC Cricket World Cup 2019 where he helped New Zealand reach the final. Now speaking about Kane Williamson's IPL career, he made his debut in Indian Premier League in the year 2015. Williamson was made captain of Sunrisers Hyderabad in IPL 2018 where he led the 'Orange Army' to the final. He had led the SRH side in last two seasons of IPL, previous year the team managed to make it to the playoffs. This year SRH side will be led by David Warner who helped the 'Orange Army' win IPL 2016 title. Kane Williamson Opens Up On His Friendship With Virat Kohli, Says ‘It’s Been Interesting’

Kane Williamson has played 41 matches in IPL where he has made 1302 runs at an average of 38.29 and strike rate of 135.06. This includes twelve half-centuries with the highest score of 89 runs against Delhi Daredevils (now known as Delhi Capitals) in IPL 2017. In IPL season 12 he featured in 9 games and scored 156 runs with the highest score of unbeaten 70 runs from 43 balls against Royal Challengers Bangalore (RCB).

We can expect Kane Williamson to bat well in IPL 2020 which will take place in the United Arab Emirates (UAE) and commence from September 19, 2020. The New Zealand skipper was seen in great form against India in the Test and ODI series which took place in February 2020. We at LatestLY wish Kane Williamson a very Happy Birthday.

(The above story first appeared on LatestLY on Aug 08, 2020 09:10 AM IST. For more news and updates on politics, world, sports, entertainment and lifestyle, log on to our website latestly.com).