The iconic former cricketer not only was a good batsman, who could take apart any attack on his day, but was also equally talented as a bowler, winning some memorable games for India with the ball in hand. As he turns 63 today and here is a look at some of his most memorable performances in international cricket. 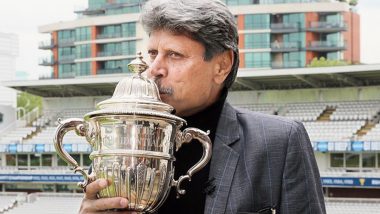 Kapil Dev, one of India's most iconic cricketers turns 63 today. There are many reasons to celebrate the legendary all-rounder on this special day, starting with the famous World Cup win in 1983, which somewhat led to India becoming the superpower it is, in modern-day cricket. As a matter of fact, what made that win even more significant was not just because it came over a dominant West Indies side, one that was feared in international cricket and had names like Sri Clive Lloyd, Sir Viv Richards, Sir Gordon Greenidge, Michael Holding, just to name a few. It was also special because it came against all odds. No one really counted India as one of the title favourites and yet they managed to pull off something that would always go down in history as one of the greatest moments in Indian cricket. And we truly have Kapil Dev to thank for this! Happy Birthday Kapil Dev: Netizens Wish Former Indian World Cup-Winning Captain As He Turns 63

Not only was he a good batsman, who could take apart any attack on his day, Kapil Dev was also equally talented as a bowler, winning some memorable games for India with the ball in hand. Well, we all knew how good he was as a captain. As the 'Haryana Hurricane' celebrates his 63rd birthday, let us revisit his top five best performances in international cricket:

1) 175* against Zimbabwe in the 1983 World Cup: This performance would perhaps be one of the first performances that cricket aficionados would pick among other memorable ones in the legendary all-rounder's career. India, batting first, lost wickets pretty quickly and in no time, they were reduced to 9-4. But Kapil Dev had other plans in mind. He walked in and played one of the finest knocks in India's rich ODI cricket history. The right-hander scored an unbeaten 175 off 138 balls with 16 fours and six sixes. India went on to win the match as they were able to register a win after two back-to-back defeats in the group stage. Unfortunately, that knock was not televised.

2) 4/90, 7/56 and 84 vs Pakistan in 1980: Kapil Dev was not just an explosive batter but was also known for his exploits with the ball and this was one of the first instances where his bowling came to the forefront, helping India script a memorable victory over archrivals Pakistan. The right-arm fast bowler took four wickets in the first innings and then followed it up with seven in the second to end with a total of 11 scalps in the game. He scored a 98-ball 84 in the first innings. India won the game by 10 wickets.

3) 1/67, 4/52 & 23* vs England, 1986: Kapil Dev turned up with a Man of the Match performance in the first Test of the three-match series against England. He took four wickets for 54 runs in England's second innings to add to his figures of 1/67 in the first innings. Graham Gooch and opposition counterpart David Gower were among his victims as he restricted England to 180 runs. He then returned with the bat with an unbeaten 23 runs as India won the match by five wickets, later also winning the series 2-0.

4) 5/28 vs Australia in 1981: Kapil Dev once again showed that he was no rookie with the ball in hand as a spectacular five-wicket haul helped India win the game by 59 runs at the iconic Melbourne Cricket Ground. Dev had also taken one wicket in the first innings. As a matter of fact, he was the third-highest wicket-taker of the series with 14 scalps in three matches.

5) 8/106 vs Australia, 1985-86: Kapil Dev's bowling prowess came to the fore once again as this time, he ended up with figures of 8/106 in India's first Test against Australia in Adelaide in their of Down Under 1985-86. Batting first, Australia scored 381 with David Boon and Greg Ritchie scoring 123 and 128 respectively. Dev broke the back of the Aussie batting, bagging eight wickets which included the dismissals of both Boon and Ritchie. India managed to score a massive 520 in response, driven by Sunil Gavaskar's 166 and the match ended in a draw.

These are just some of a huge list of illustrious performances in international cricket by the legendary all-rounder. After all, he is the man to forever change the way Indian cricket was looked at by the world. From all of us Latestly, we wish Kapil Dev a very happy birthday!

(The above story first appeared on LatestLY on Jan 06, 2022 02:08 PM IST. For more news and updates on politics, world, sports, entertainment and lifestyle, log on to our website latestly.com).