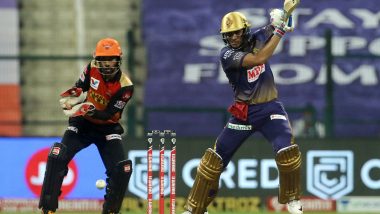 Kolkata Knight Riders recorded their first win in Indian Premier League 2020 (IPL 2020) as they defeated Sunrisers Hyderabad by seven wickets on Wednesday at the Sheikh Zayed Cricket Stadium in Abu Dhabi. The two-time champions produced a complete performance on the night as after a slight hiccup in the start, KKR managed to get their act together and young Shubhman Gill deserves most of the credit. KKR vs SRH, IPL 2020: Shubman Gill Scores Brilliant Half-Century, Fans Praise Kolkata Knight Riders' Batsman.

After electing to bat first, Sunrisers Hyderabad got off to a poor start, losing Johnny Bairstow cheaply. However, David Warner and Manish Pandey got their innings back on track with the latter scoring a half0century. However, the Hyderabad batsmen lacked intent and never got going, most of which was down to the discipline shown by KKR bowlers. However, SRH managed to put 142 runs on the board. Kolkata Knight Riders Beat Sunrisers Hyderabad by Seven Wickets.

Chasing a par target, Kolkata Knight Riders got off to a wobbling start as they lost the opener, Sunil Narine, for cheap. Nitish Rana, Dinesh Karthik followed te West Indian but it was young Shubhman Gill’s night as he scored a brilliant half-century to guide his team to a crucial win. England skipper Eoin Morgan also amassed 42 runs as KKR registered a maiden win in IPL 2020. Meanwhile, here are some stats from KKR vs SRH clash in IPL 2020.

# KKR youngster Kamlesh Nagarkoti made his debut in IPL

With their maiden win of the campaign, Kolkata Knight Riders moved to fifth position in the points table. However, a second successive loss meant Sunrisers Hyderabad remain rooted to the bottom. KKR face Rajasthan Royals next while SRH will take on high-flying Delhi, who have a perfect record in the competition so far.

(The above story first appeared on LatestLY on Sep 26, 2020 11:52 PM IST. For more news and updates on politics, world, sports, entertainment and lifestyle, log on to our website latestly.com).