Know All About 1979 Cricket World Cup: History, Participants and Winner of the Second Edition of World Cup 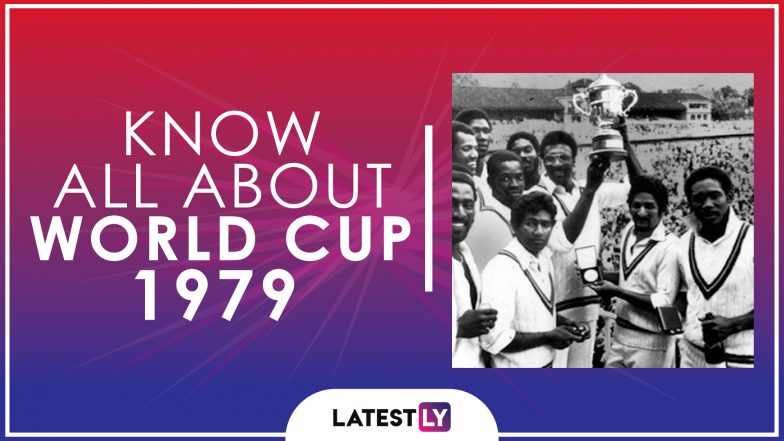 1979 was the second edition of the cricket World Cup. (Photo Credits: File Image)

The 1979 Cricket World Cup, also known as the Prudential Cup, was the second edition of the limited-overs World Cup. It was held in England and was played from June 9 to June 23, 1979. The matches in the second edition of the World Cup featured 60 overs per side, just like it did in the first World Cup. The 1979 World Cup was held across six venues- Birmingham, Nottingham, Lord's Cricket Ground, Leeds, The Oval and Manchester. The tournament featured 15 matches, including the semifinals and the final.  ICC Cricket World Cup 2019 Schedule in PDF: Ticket Prices, Dates, Venue Details & Timetable Available for Download Online.

Participating Teams and Format: A total of eight teams participated in the 1979 World Cup. These eight teams were divided into two groups of four teams each. England, Pakistan, Australia and Canada formed Group A, while Group B comprised of West Indies, New Zealand, Sri Lanka and India. After the group-stage matches, two teams from each group made it to the semi-finals.

In reply, England was all out for 194 and West Indies won the game comprehensively. This was the second time in a row that West Indies had won the Cricket World Cup. Sir Viv Richards was declared the Man of the Match for his century in the finals. Indian Team For ICC Cricket World Cup 2019: Players Who Will Be Playing Their First ODI CWC Trophy.

Gordon Greenidge of West Indies emerged as the highest run-scorer in the tournament and scored 253 runs from four matches. England’s Gary Gilmour was the highest wicket-taker with 10 wickets from five matches.