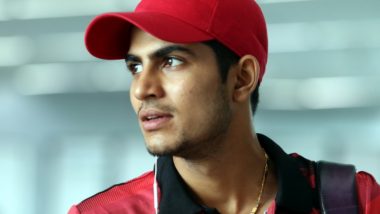 Kolkata Knight Riders have shared a video of Shubman Gill on social media ahead of IPL 2020. The clip was shared with a song ‘Dhoom Dhadaka’ being played in the background. In the clip we see Shubman Gill hitting a few shots in the while sweating it out in the nets. The clip was probably shot last year during IPL 2019. Needless to say that the clip has created an excitement in the minds of the people for the upcoming edition of the Indian Premier League 2020. The IPL 13 will begin on September 19, 2020, in UAE. IPL 2020 Squad Updates: AB de Villiers, Ben Stokes, Andre Russell, Lasith Malinga and List of Players Who Could Miss Upcoming Season or Part of it.

The BCCI chose the venue as UAE due to the lower number of cases in the country. Initially, the BCCI was of the opinion that the IPL 2020 should be conducted in India. But the alarming rise in the number of cases in the country forced the Board to think of another option. For now, let's have a look at the video shared by the Kolkata Knight Riders.

A few days ago, the IPL Chairman Brijesh Patel shared the dates of the IPL 2020 which sent the Internet into a frenzy.  The cricket starved nation is keen for the IPL 2020. Not much has been announced officially about the tournament. But the teams have been asked to leave for UAE by August 20, 2020. Like you guys, we too have been waiting for more updates on IPL 2020.

(The above story first appeared on LatestLY on Jul 31, 2020 10:33 PM IST. For more news and updates on politics, world, sports, entertainment and lifestyle, log on to our website latestly.com).