County club Warwickshire on Friday announced that they have signed India all-rounder Krunal Pandya for the upcoming season of Royal London One-Day Cup. 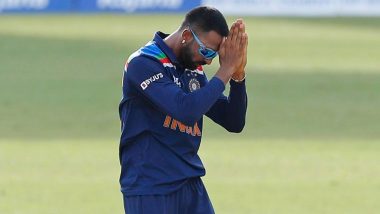 Birmingham, July 1: County club Warwickshire on Friday announced that they have signed India all-rounder Krunal Pandya for the upcoming season of Royal London One-Day Cup. Pandya will be available for Warwickshire for the whole Royal London One-Day campaign, making him the third Indian to feature in the ongoing season of the English domestic cricket circuit after batter Cheteshwar Pujara (Sussex) and all-rounder Washington Sundar (Lancashire). "I'm extremely excited to get the opportunity to play county cricket and to join such a history Club as Warwickshire. Edgbaston is a special place to play cricket and I can't wait to call it my home." No R Ashwin in India Playing XI in 5th Test Against England, Fans Left Highly Disappointed With Team Selection.

"I hope I can play my part in a successful 50-over campaign with the Club and I am looking forward to meeting my team mates. I would like to extend my gratitude to both Warwickshire County cricket club and the BCCI for this opportunity," said Pandya in a statement. Pandya made his T20I debut for India in 2018 against the West Indies in Kolkata and followed that with an ODI debut against England at Pune in 2021 where he struck the fastest half-century (26 balls) in history by a debutant in men's ODI cricket.

Overall, Pandya has played five ODIs for India, making 130 runs, with an unbeaten 58 as his highest score apart from picking two wickets with his left-arm spin. In 19 T20Is, he had made 126 runs and picked 15 wickets. "Krunal is an incredible signing for the Club, and I'm delighted to welcome him to Edgbaston. Krunal will bring a wealth of international experience to a team that will be desperate to do well. "Due to our impressive T20 performances, we will lose players to The Hundred, but that's always going to happen to successful teams. The opportunity to add a world-renowned all-rounder to an exciting group is fantastic," said Paul Farbrace, Director of Cricket at Warwickshire. In total, Pandya has featured in 76 List A matches scoring 2,231 runs at an average of 37 and taken 89 wickets. He has been a regular presence in the Indian Premier League (IPL) having represented Mumbai Indians and more recently Lucknow Super Giants from the 2022 season. How to Watch IND vs ENG 5th Test Live Streaming in India? Get Free Telecast Details of India vs England Cricket Match With Time in IST.

Warwickshire will play eight group-stages matches taking place from August 2 to 23, with four at their home ground in Edgbaston. They are placed in Group A alongside Durham, Gloucestershire, Leicestershire, Middlesex, Nottinghamshire, Somerset, Surrey and Sussex. The winners from group A and B will progress straight to the semifinals with the second and third placed teams from both groups playing a play-off match against a team from the other group which made up the play-offs. The winner from both playoffs will meet the teams who already reached the semifinals for a spot in the title clash.

(The above story first appeared on LatestLY on Jul 01, 2022 03:25 PM IST. For more news and updates on politics, world, sports, entertainment and lifestyle, log on to our website latestly.com).