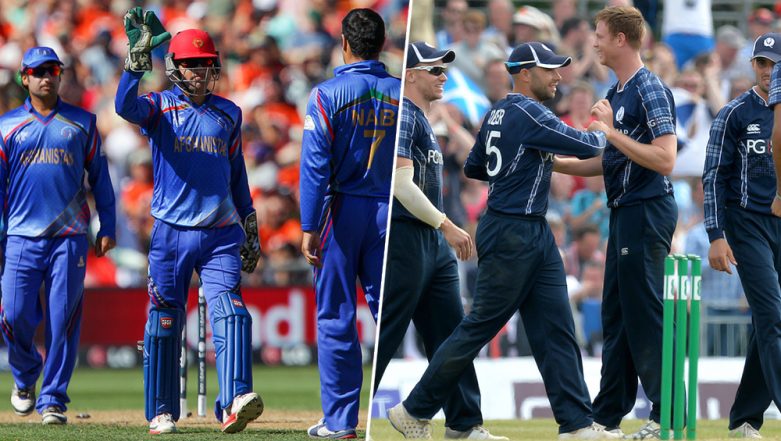 The Afghan side will be playing Scotland at Edinburgh in the two-match One Day International (ODI) series starting from May 8, 2019, before they head for ICC Cricket World Cup 2019 in England and Wales.  Today (May 8, 2019) Scotland will square off with Afghanistan in the 1st ODI of this two-match ODI tournament. Meanwhile, if you are looking for live streaming online of SCO vs AFG then check below. Amul Named As Afghanistan Cricket Team's Sponsor for ICC Cricket World Cup 2019.

Afghanistan recently played against Ireland in 5 match ODI series in Dehradun, India. The series ended with 2-2 as one match was washed out due to rain. In the last five encounters between Afghanistan and Scotland, AFG has beaten SCO twice with one being a no contest. ICC Cricket World Cup 2019: Afghanistan Captain Gulbadin Naib’s Brother Sharaf Naib Made World Cup Trophy From Grass (View Pics).

It must also be noted that Afghanistan will be playing this series against Scotland without Rashid Khan, Mujeeb-ur-Rahman and Mohammad Nabi. As the Afghan stalwarts are busy with their respective Indian Premier League (IPL) teams in India. Mujeeb's team Kings XI Punjab has not qualified for the playoffs and he is in transit as his team played last this past Sunday against Chennai Super Kings (CSK). While the other two Afghanistan cricketers Rashid and Nabi will play for Sunrisers Hyderabad in a crucial IPL 2019 eliminator against Delhi Capitals. Afghanistan Team for ICC World Cup 2019: Hamid Hassan Makes Comeback in Gulbadin Naib-Led 15-Man Squad For CWC19.

SCO vs AFG ODI match will be played on May 8, 2019 (Wednesday). The match will begin at 03:30 pm IST (Indian Standard time), 10:00 am GMT and 2:30 pm Afghanistan Standard time (AST). The first match of this ODI series will be held at the Grange Cricket Club, Edinburgh.

There won’t be any live telecast of SCO vs AFG ODI in India. Good news for fans is that he live streaming online of SCO vs AFG match is available on official Cricket Scotland YouTube channel here.  The fans can also follow the SCO vs AFG live score updates by clicking on this link for live score and ball-by-ball commentary from here.