Delhi Capitals had its fair share of momentum shifts in their IPL 2022 match against Lucknow Super Giants but every time the Rishabh Pant-led side seemed to be gaining dominance, KL Rahul's LSG pulled it back by picking up a wicket or two and Mohsin Khan was leader of the pack for them. 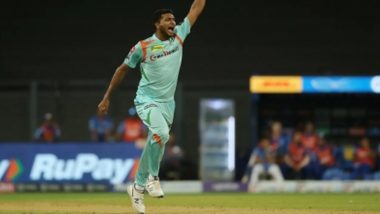 Mumbai, May 2: Delhi Capitals had its fair share of momentum shifts in their IPL 2022 match against Lucknow Super Giants but every time the Rishabh Pant-led side seemed to be gaining dominance, KL Rahul's LSG pulled it back by picking up a wicket or two and Mohsin Khan was leader of the pack for them. The 23-year old Mohsin used his pace, length deliveries, cutters and shot balls to perfection and picked wickets (4/16) at the crucial junctures and led Lucknow to a six-run win over Delhi in the thrilling 45th match of the IPL 2022 at the Wankhede Stadium, here on Sunday. DC vs LSG Stat Highlights, IPL 2022: Lucknow Register Crucial Win, Thanks to KL Rahul, Deepak Hooda and Mohsin Khan.

Chasing a target of 195/3 for victory, captain Pant was going strong for Delhi but Mohsin returned for his second spell and set DC skipper up with four length deliveries, including cutters, up front. The pacer then went full and had Pant failing to flick from around his pads, and saw his stumps flattened on 44. Axar and Powell then found a couple of boundaries to keep the required run rate to around 12, but Mohsin's final over provided the body blow.

A length ball angling across was dragged by Powell (35) to Krunal Pandya at deep midwicket. A few balls later, Shardul slog swept Mohsin to the same fielder and the game shifted in LSG's favour. Lower down the order, Axar Patel (42 not out off 24) and Kuldeep Yadav (16 not out off 8) batted well and kept Delhi in the game till the last over, but eventually, their team was restricted to 189/7 in 20 overs, losing by six runs. With the win, LSG jumped to second place on the points table with 14 points while DC are slotted in at the sixth spot with 8 points. IPL 2022: Ravindra Jadeja Knew He Would Be the Skipper This Year, Says MS Dhoni.

Speaking after the game, skipper KL Rahul praised Mohsin for his sensational bowling effort, saying that the left-arm fast-bowler has pace and a good brain as well. "He (Mohsin Khan) has been brilliant, played him in the nets for the first time a month ago... didn't want to face him, seriously. He was sharp, he's scary at times in the nets. It's not just the pace, he has a good brain, has a bit of skill as well, has a great slower one and he knows when to use them," said Rahul at the post-match presentation.

The LSG skipper also mentioned that the pacer is a confident guy and very eager to learn. "Eager to learn, eager to play, obviously he's been around with the teams for the last 2-3 years, he hasn't got a chance, he was very eager to play and he's been a confident guy. Even under pressure, he's bowled some really big overs for us and he's performed for us. Hopefully, he can learn, get better, get confident and keep doing the job for us," he said.

(The above story first appeared on LatestLY on May 02, 2022 11:02 AM IST. For more news and updates on politics, world, sports, entertainment and lifestyle, log on to our website latestly.com).